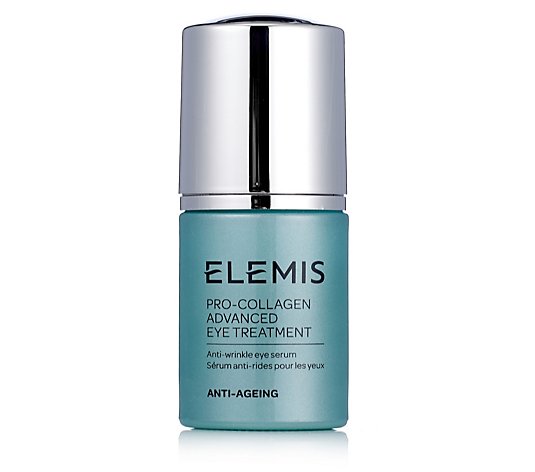 This Advanced Eye Treatment from Elemis works to hydrate the skin and smooth the appearance of fine lines and wrinkles around the delicate area, promoting a more youthful appearance around the eyes. This targeted formula is the perfect aid in tackling the visible signs of premature ageing.

Discover Pro-Collagen - this popular range is one of the signature collections of the Elemis brand, and features treatments specifically formulated to help target visible signs of ageing, helping to create a supple, moisturised and revitalised look.

Incorporating the soul of aromatherapy, artistic spirit and a scientist's commitment to results, Elemis aims to improve your skin wellness. Each formula is crafted with natural actives and combined with high-performance technology to help you work towards clinically tested solutions you'll love.
Print this page

Rated 4.2 out of 5 by 68 reviewers.
Rated 5 out of 5 by Woodencreatures Magic in a bottle This is one of only two beauty products that I repeat purchase. I got it in a TSV in 2016 and for me it had immediate effects. My left eye had folds of skin in the outer corner and I swear after about 3 days the folds had gone, I couldn't believe it. This serum worked so fast I really thought I could actually see it lifting my lids (I'm not kidding!) I wish I'd taken before and after photos so I could remind myself what it was like before. I'm not sure it reduced any lines but it definitely lifted my lids. January 06, 2017
Rated 2 out of 5 by LoubyLu Stings I've been using this for about a month. I am still waiting for any signs of improvements in either my dark circles or fine lines...Nothing yet. But what disappoints the most is that this product stings my eyes. I dont have sensitive eyes usually, and despite being careful when applying, it still makes my eyes smart. I won't repurchase May 06, 2016
Rated 1 out of 5 by MrsDL Awful Product I love Elemis so had very high hopes for this product, however it was awful. It was very watery so you have to be quick putting it on as iI found it ran down my face and I actually found it made the area around my eyes worse. Needless to say it was returned. April 24, 2016
Rated 5 out of 5 by HUGGYBEAR An Eye Opener Had never used an eye cream before but decided as I was getting older I needed a good one. I thought I would try Elemis Pro Collagen Eye and I am amazed at the result. You have to be patient as it does not act immediately it may take a while. I found it opened up the eye area and gave a more wide awake appearance. I recommend this product but stress, be patient it does work . September 14, 2015
Rated 5 out of 5 by ShotgunChewy Dark Circles GONE For a couple of years I've had dark circles under my eyes despite drinking lots of water, green tea, eating and sleeping well. I have tried a few products with no effect and I got an advanced Eye Treatment 15ml as part of a multi buy pack. With in a month of applying when I remembered at night my dark circles improved, so I got into the habit of applying every night. One day I just couldn't find them anymore, my laughter lines are also reduced to the point that people don't believe I'm 35. I'm actually 43. September 05, 2015
Rated 5 out of 5 by Hardtoplease This DOES work! I am now on about my fourth bottle of this amazing product. It did take a little while to see the results. I did not notice anything dramatic at first ,then after a month or so I suddenly realised that my crinkly eyelids were smoothing out and much more lifted. Crow's feet were also much improved. My eye make up now looks so much better. The added bonus is that this contains no Parabens ( unfortunately that does not apply to all Elemis products), but this is a winner. April 19, 2015
Rated 5 out of 5 by bunnyboo Best eye product for me I first used this when it was launched as part of a TSV.. and was very impressed. I think I have used 2 bottles since, and then decided to give something else a try . I have to say the other products are good , but they don't compare to this. I am 66 , and I would say that my eyes still look relatively good for my age. But.. I have noticed recently that they were starting to show a little puffiness, so I have taken the bull by the horns and gone for the auto-delivery. My bottle arrived this morning and within an hour my eyes were looking more lifted, and the puffness had gone. So easy to use and for me , fantastic results, so I won't be tempted to change in future. Results are definitely noticeable on my older face !! January 14, 2015
Rated 1 out of 5 by LadyShe Eye gel Didn't make the slightest difference to my eyes area. I will definitely be returning it after the festive season. December 28, 2014
2 3 4 5 ... 9 Next