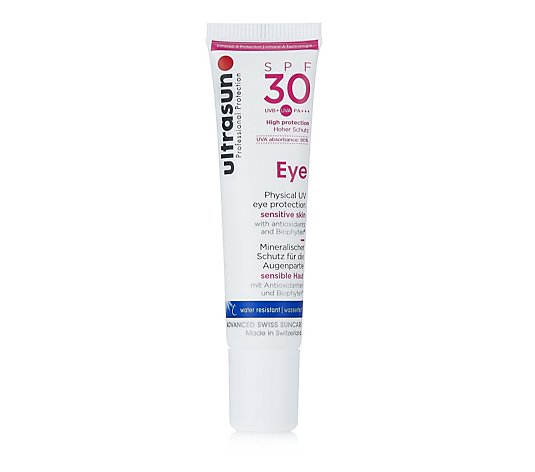 UV Mineral Eye Protection SPF 30 provides targeted high protection from UVA and UVB for the delicate skin around the eyes, while helping to maintain optimal moisture levels. This protective eye cream will also help reduce the appearance of fine lines, wrinkles and dark circles, giving you a new way to brighten the eye contours and protect your skin against UV rays.

Contains: Please refer to the sun account to make sure you use the right level SPF for your skin and do not exceed the amount of time you can spend in the sun.

Rated 3.1 out of 5 by 30 reviewers.
Rated 5 out of 5 by barneysmum At last - no stinging eyes :) This has been in the cupboard since I bought with the tsv but I've just come back from a winter sun holiday so finally got to try it. Could end up using it a lot more, not just in the sun. The white pigment deals brilliantly with darkness around the eyes and it does not sting like the face cream will if you get some near your eyes. I used the tiniest amount and patted it in gently, all across the lid and right up to the lash line. I do have to admit that I did use my hydrotenseur first, but allowed it to dry completely before applying this product. There was no roll off for me. I love it...! January 10, 2017
Rated 5 out of 5 by Fussymiss Excellent My experience of this product is different to so many other reviews. At first I found the product very white and hard to blend but realised I was using far too much product. I now use this product everyday on lids and under eyes with my normal eye cream around the eye socket. I have extremely sensitive skin around the eyes and thrilled I have no problems with this cream. For me it reduces puffiness and helps with dark circles. Very happy with this cream. October 31, 2016
Rated 1 out of 5 by Vanessa75 Not up to Ultrasun's Standard Very disappointing when you put it on you end up looking like a panda thats if you can get it to go on. Certainly not up to Ultrasun's standards i would never use anything other than Ultrasun. Sorry returning this product and going back to using my Ultrasun 30 face which I have used for years and is fantastic. August 28, 2016
Rated 4 out of 5 by Trillian7 Almost Perfect Love Ultrasun and buy everything so had to have this! Did not experience the roll off and it moisturises and of course protects, Only bug bear is it is TOO WHITE! Looks a bit weird so you have to blend with a serum or something or apply make up over it. This white needs to be toned down then I will LOVE it. August 17, 2016
Rated 5 out of 5 by Voocom It's in the application The first time I tried this I agreed with some reviewers that it appeared to roll off. Luckily I had also read some of the other reviews which explained how to apply successfully. You do need totally clean skin, so the next morning I applied it again before any other creams and it disappeared without trace, leaving no white marks or rolling off. I put a blob the size of an uncooked grain of rice on my ring finger. Let it warm slightly and spread with my other ring finger, then patted lightly around the eye. No problems at all. July 28, 2016
Rated 3 out of 5 by FLISS7890 Dissapointed Sorry this is not for me. I love Ultrasun and have been using the sun lotions for a number of years and would not dream of using anything else now. However even using the eye cream as Abby suggests it dries far too quickly and looks like a white powder when dry. Also because of the drying it drags the skin. Will go back to using my other Ultrasun products as an eye cream Big disappointment as this was bought for me as a gift because the friend who purchased knows I love the product July 14, 2016
Rated 1 out of 5 by Lazzer I cannot get it on my eye! Firstly, I have to say that Ultrasun products are fantastic. However, this eye cream will simply not apply to the skin on my eye! It agglutinates, doesn't spread and ends up back on my finger! I've no doubt for some this cream works, so try it knowing you can return it! June 26, 2016
Rated 1 out of 5 by CMRNL TERRIBLE Dreadful product, my husband commented that I had white around my eyes the first time I tried it. I have tried various applications since but cannot use it without white marks or flaking. I like other contributors did not keep the packaging so cannot return. Miffed really, complete waste of money. I have used Ultrasun for all the family for years now but I won't be using this again! June 23, 2016
2 3 4 Next