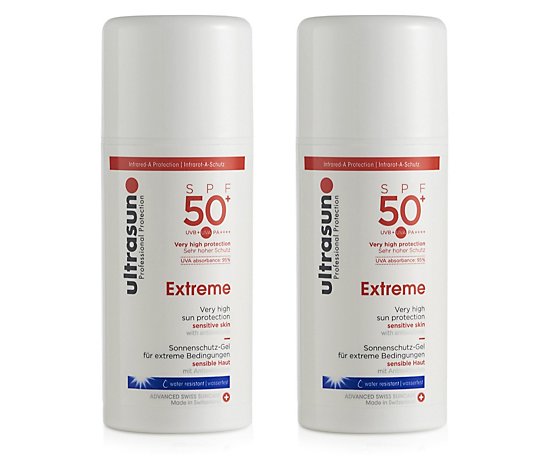 This fast-absorbing, non-greasy, non-sticky UVA and UVB sun protection gel offers very high sun protection for the whole family, especially those with sensitive skin and children. Make sure your skin is well protected even in extreme sun conditions with the Extreme SPF 50+ from Ultrasun.

Long-lasting protection - just one application of SPF from this Ultrasun range provides long-lasting protection - although another application may be required in extreme circumstances - and offers gentle formulas that are suitable for all skin types. With a shelf life of up to two years after opening these products will help keep your skin protected season after season.

How to use:
Please refer to the sun account to make sure you use the right level SPF for your skin and do not exceed the amount of time you can spend in the sun.

Created by Swiss suncare experts, Ultrasun is a pioneer in creating once-a-day sun protection, designed to meet specific needs of varied lifestyles including use during sport, for the whole family and extra care, as well as specially formulated facial protection. Their carefully formulated and extensive range answers every suncare issue, and is popular with professionals, sports player sand even the emergency services