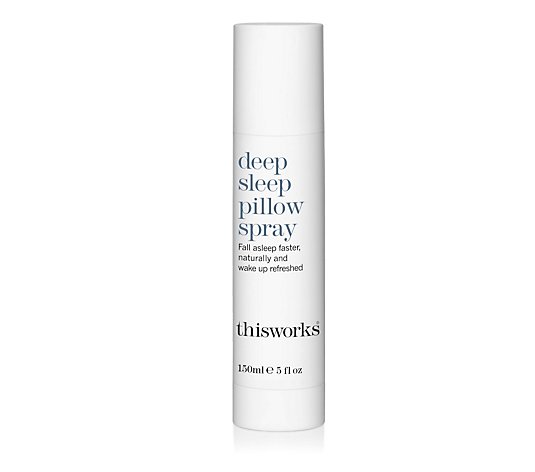 The Deep Sleep Pillow Spray is This Works' hero product, formulated with lavender, vetiver and wild camomile essential oils, and is designed to help calm the mind and relax the body, preparing you for a good nights sleep and helping you wake up feeling refreshed. Discover your new bedtime saviour and enjoy a beautiful soothing scent before you drift off with this wonder spray from This Works.


Get your beauty sleep - getting more sleep will not only allow you to wake feeling well rested, relaxed and ready to start the day but you will appear refreshed too. So, to help you look your best, embrace the power of This Works and discover products designed to help you relax and prepare you for a good night’s sleep.

Rated 3.5 out of 5 by 34 reviewers.
Rated 1 out of 5 by duster It doesn't work In my opinion this is a waste of money. It didn't work for me. February 01, 2017
Rated 5 out of 5 by kkflat Fabulous natural sleep aid I've been using this for a few weeks now and am hooked! I can't use medication as I'm asthmatic, and had been searching for a solution. Very calming and relaxing, have recommended to my mum too. April 25, 2016
Rated 3 out of 5 by Marudai Couldn't bear the scent I tried this once - fresh bed linen and this spray should have been a recipe for a great night's sleep. I did get off the sleep quickly but had a rough night - I simply couldn't bear the smell, and had to change the bed linen again after the following night because the smell wouldn't fade away. I was expecting a lavender scent not this overpowering chemical smell. April 22, 2016
Rated 1 out of 5 by Sorefoot12 Disappointed I really wanted this to work but it doesn't. I persevered for several weeks but it did not help me to get to sleep quicker, nor did I stay asleep longer and I didn't feel more refreshed in the morning. It does smell good though. April 14, 2016
Rated 3 out of 5 by fourpawsplus It doesn't work for me! It's a nice smell but i have to say for me, this simply doesn't do anything beyond scent the bedding ....it's not one i would buy again & to be honest it's put me off trying anything else from the range. April 07, 2016
Rated 5 out of 5 by diamonds04 Very good product! My husband saw this product being shown and decided we needed to try this so ordered 2 lots of the spray! Have to say, just love it and works for both of us, the smell is just enough and I find going to sleep much quicker than if I don't use it! April 03, 2016
Rated 5 out of 5 by joy99 Heavenly This is a repurchase l have used the75ml of it previously and l liked it. But having been without it for sometime and it being double the size l thought l would buy it again and a couple of sprite's of the sublime scent just makes you start to say ahhhh!!! April 02, 2016
Rated 5 out of 5 by emlouise12 It Works For Me! This is my go to product when I need a good night's sleep it really helps me relax and unwind. I have recommended this product to so many friends and family who have also said its worked for them. The supersize is amazing value too thank you QVC! April 01, 2016
2 3 4 5 Next