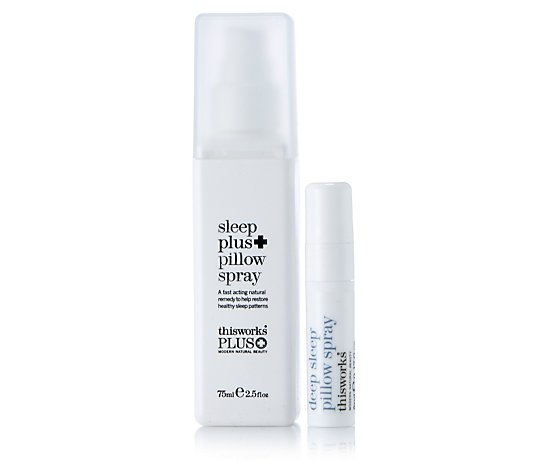 These bedtime companions have been created to help you achieve the most restful night's sleep possible. Layer the Sleep Plus and Deep Sleep sprays to help enhance your relaxation and promote a good night's sleep. Contains:
Print this page

Rated 2.6 out of 5 by 12 reviewers.
Rated 5 out of 5 by emlouise12 Helped me stay asleep I was curious to try this product as i am a restless sleeper and there are mixed reviews but i can honestly say its worked for me. January 06, 2017
Rated 1 out of 5 by Lhasa Doesn't Work - for me Really wanted this to work but unfortunately it doesn't. Smells nice and that's about it. December 04, 2016
Rated 1 out of 5 by Duckie29 Don't Buy I bought this as I was going away for a week and usually have difficulty sleeping in a new environment. I thought this might help but how wrong can you be. It made no difference at all and was a waste of time and money. Do NOT buy this unless you want a lavender fragrance. September 18, 2016
Rated 2 out of 5 by elliemay3 not for me! have been using this for two weeks but am sorry to say that it did not do anything, in fact the small deep sleep mini spray was much more effective, am going to have to return.. August 19, 2016
Rated 1 out of 5 by Newchas It Did Not Work For Me Sorry this product was of no value to me, it did not help at all despite following the instructions to the letter. Clearly the statement 'That It Works' is not the case for everyone. Presenters should advise the viewing public that it may not work. Returned for a credit as pointless in continuing to use. August 10, 2016
Rated 4 out of 5 by SheMag Smells less, works harder I am a fan of the regular strength but was waking up during the night. So I switched when this came up on easypay. I don't think it smells as strong as the regular, but oddly I am now sleeping through. So it's another case of I don't know how it works, it just does! August 07, 2016
Rated 1 out of 5 by Mindy01 Not for me It may be called This Works but it didn't for me. No change to my not sleeping. Tried it on pillow, hair, and nightwear. Even tried spraying it on a tissue and inhaling the lovely scent for half hour before going to bed. This was suggested by a friend. Nothing worked. Any other suggestions on how this might work will be gratefully received. July 28, 2016
Rated 4 out of 5 by CassiniDivision Why gelatin? This stuff really works but I find I have to spray my hair or pyjamas with it not the pillow...however I wont be buying again as it has gelatin in. June 12, 2016
2 Next