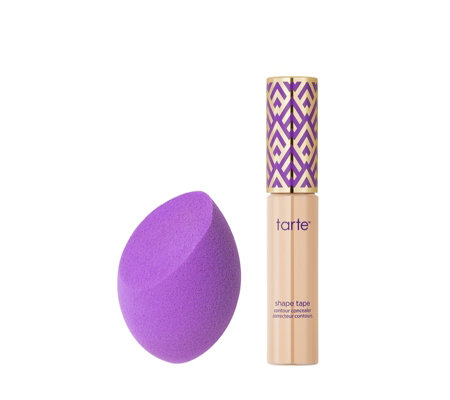 The Shape Tape Contour Concealer from Tarte is a full-coverage, radiant, creamy concealer featuring a tapered wand applicator for precise sculpting, strobing and spot coverage. Paired with the new Quickie Blending Sponge, youll get smooth, even, youthful-looking coverage without any settling into fine lines.
Contains:

For contouring and highlighting:

Specially selected by our buyer

Our Cosmetics buyer, Kayleigh, chose this as one of her beauty must-haves, saying: "By far the best thing in my make-up bag! Shape Tape helps to diminish the look of my dark circles and the Quickie Blending Sponge helps to smooth the product out like a dream. I use the shade Light – Medium as I like to have a brighter finish to my under eye area."