New to QVC? Use code FIVE4U for £5 off your first order. See terms 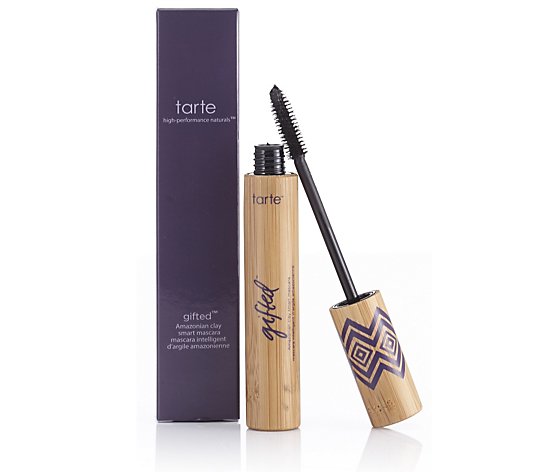 Rated 4.2 out of 5 by 29 reviewers.
Rated 5 out of 5 by Linehoej A favourite! I just love the Gifted mascara. It really is a gift for your lashes, as Leigh always says. It's very buildable so it's excellent for both everyday and evening use. I love that it nourishes my lashes and I noticed losing less lashes than normal while using this. It doesn't make my lashes stiff and it's very easy to remove with water and a non-oil based makeup-remover at the end of the day. August 09, 2016
Rated 5 out of 5 by Phao65 Everything it says and more After having surgery on both eyes, my normal mascara made my eyes flare up and the skin under my eyes look like eczema. I bought another hypo allergic mascara and this did the same. I did a google search of hypo allergic mascaras and this came up recommended. I looked at the reviews and thought i would give it a try, it is everything it says on the reviews, my eyes are great and the lashes look like I have had false ones added. All I can say is thank you. February 13, 2016
Rated 5 out of 5 by SuperBeautyFan New favourite mascara I first received this mascara in a kit full of other Tarte items and to be honest had bought the kit for the other items. In order not to waste it though I thought I'd give it a try. I'm so glad I did! It gives me great looking lashes (people have asked me if I'm wearing false lashes) and doesn't smudge. It also stays shiny looking all day and doesn't go dull like other mascaras. No flaking either and comes off easily when you want to remove it. November 30, 2015
Rated 4 out of 5 by Rubygloom Good everyday mascara This is a good every day mascara. It will give longer, pretty lashes. The colour is a nice dark black and it is easy to wash off. Only issue I find is that it smudges a little. All in all, worth trying! November 06, 2015
Rated 5 out of 5 by Boom fabulous This is the best mascara I have bought it makes me look as if I am wearing false eye lashes. Easy to remove this is what I will be buying from now on. This is even better then Mally which is what I used previously. July 27, 2015
Rated 5 out of 5 by PenelopePloom Lovely mascara A lovely mascara which leaves your eye lashes flexible and soft with a nice depth of colour. Stays put once applied. Have tried others but come back each time. July 22, 2015
Rated 2 out of 5 by Molly47 DRIED OUT AFTER THREE WEEKS!! Having used a number of Tarte products which I am very happy with I thought I would try the mascara. Dried out very quickly so I would not recommend this product! May 21, 2015
Rated 2 out of 5 by Armani2002 Okay In the quest to find the ultimate mascara, I thought I had found it, unfortunately I was wrong. It's a nice enough mascara but no better than ones which are cheaper on high street or QVC. Will be returning this product and the quest continues April 13, 2015
2 3 4 Next

Get sneak peeks at special offers and upcoming events delivered straight to your inbox.