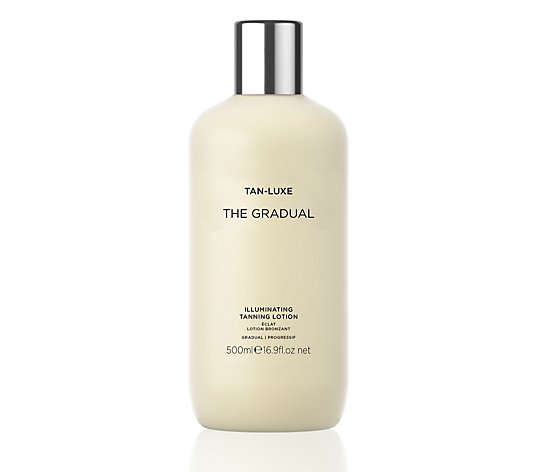 This Tan-Luxe lotion and oil hybrid is formulated to help deliver a light, buildable colour across your face and body, smoothing and toning the appearance of your skin and leaving a glowing finish. Moisturise your skin while achieving a sun-kissed glow with this Gradual Tan Lotion by Tan-Luxe.
Contains:

Taking the beauty world by storm, Tan-Luxe's innovative self-tanning formulas aim to work with your natural skintone to give your complexion a healthy glow.
Print this page

Rated 4.1 out of 5 by 44 reviewers.
Rated 2 out of 5 by jannyclaire1 Smell I did get a nice glow after using this product, but the smell is dreadful after it has been on the skin a while. Even after a shower i could still smell it next day. Dont understand why one reviewer says they are "shocked" at another review, we all have different skin and re-act differently. Easy to apply, and did appear streak-free, but for the presenter to say it doesnt smell must be joking. June 21, 2016
Rated 4 out of 5 by parisgirl Ok... I tried this and applied it like a body lotion but at the same time thinking it is a gradual tan so I did apply with care when putting it on ,however I wouldn't call it a gradual tan as I woke up with a full tan with bits I'd missed (I wasn't expecting an instant result) ..it's not as easy as it looks because there's no guide colour to it so just be aware when applying. Yes it smells of raspberry when you apply but when that wears off you do get that fake tan smell,on a positive note the colour that develops is lovely and you can use it on the face as well. June 20, 2016
Rated 4 out of 5 by jobe It's ok Have just applied this 3hours ago. When I was applying it there was a lovely smell of raspberries but after 1 hour the usual fake tan smell came through and it is intensifying. I can see a tanned look coming through which I have to say is natural looking and very even. I would say the result is very good and it's a case of watch this space. I intend to use every 4days soI will report again after the next application June 18, 2016
Rated 5 out of 5 by Caz1234 Love this new product! Finally I have found a great tan without a bad smell! And it gives such a nice glow rather than going a horrible orange colour. I can't wait to try out more products in this range! June 17, 2016
Rated 4 out of 5 by HLB1 tanfastic Great tan after a few hours, one reservation be careful when drying yourself after shower don't recommend your best white fluffy towels as it does stain them. The smell is pleasant but after a while it fades and you do get that just tanned smell but will go after shower. June 17, 2016
Rated 2 out of 5 by pettits Streaky I've been using decleor moisturiser mixing with another brand to get a subtle glow. Decided to give this a go. Again mixed with another brand ... Streaky and the smell it's disgusting lasted for hours on the skin . This ones going back June 17, 2016
Rated 3 out of 5 by Nottz Smell Gives quite a natural looking tan but I'm sorry after about 30 minutes the raspberry smell turns to that horrible fake tan smell you get with most fake tan products . June 16, 2016
Rated 5 out of 5 by ilisaac Brillant It shocks me that some people are so negative about this product. It is absolutely Brillant, best gradual tan I've ever used, I done exfoliate or do any preparations I just put it on it looks so natural, all I can say is that they are not rubbing it in properly it as never streaked on me. A little tip I have added a few drops in from my last TSV and colour is amazing. Did used to buy decleor gradual tan but no more unless included in a TSV June 16, 2016
Previous 2 3 4 5 6 Next