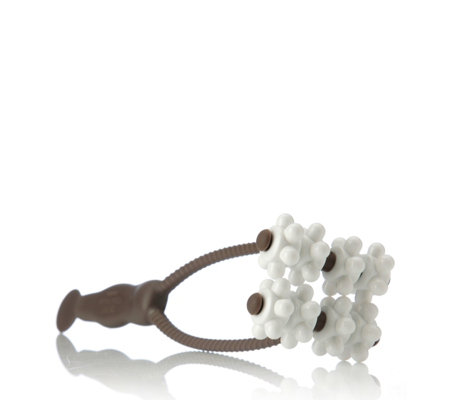 Now you can recreate a beauty salon facial massage at home. This Skinesis Facialift facial massage tool mimics the unique tapping, pinching and knuckling of Sarah Chapman's facial massage. The tool aims to reduce puffiness, boost the supply of nutrients to your skin and release tension in your face, leaving you feeling fresh and radiant.
Directions for use:

With over 20 years of experience as one of London's top facialists, Sarah Chapman's expertise have been transferred to her range of anti-ageing skincare, which is renowned for a combination of high potency cosmeceutical ingredients and luxurious packaging.Get an instant upgrade to your skincare routine with Sarah Chapman.

Rated 3.7 out of 5 by 39 reviewers.
Rated 4 out of 5 by VictoriaReviews Results but at a price Does this product work? Yes. Does it cause other problems? For me, yes. I'm in my 30s and my jaw is showing the first signs of slackening. I started using this for 1-2 minutes each morning and night with my serum on. This worked within a week. My jaw and neck are tighter. the lines on my cheeks and especially down from my nose down to the outside of my lips are completely gone. However, like the other reviewer, it caused spot outbreaks on my neck (which I've never had before) and on the jaw. I went down to using this once a day which helped. I now see they are advertising as using this with the cleaner rather than the serum so have tried that. Spots are declining, but slowly. June 25, 2013
Rated 5 out of 5 by Iceprincess AMAZING LITTLE TOOL I received this item in the Pro-Sculpt Moisturiser package. It's great! I agree that it was a bit painful at first use - and my face was sore the next day - but it was actualy the facial muscles that were sore as they had been getting a good workout through using this tool. I've continued to use it two to three times a day and can see and feel a difference already [after four days]: my neck and face feel firmer. I would say to anyone, go ahead and give it a try. You always have your 30-day month back guarantee if you feel it's not for you. May 20, 2013
Rated 1 out of 5 by shona4 torture! Yes, i found this gadget something akin to torture to use,i dont have alot of fat on my face so i suppose that is why i couldnt bear the pain as i rolled it across my cheekbones,the next day it bought out two spot directly on the cheekbones either side of my face so defo caused by this torturous face roller. Was too late to send it back as i took my time in trying it when i first received it.so taking a tip from another qvc fan and roller the body with it! June 30, 2012
Rated 4 out of 5 by 0007 I like it I have been using this for a couple of weeks after my husband and boys nicknamed me turkey! (after my flabby neck/chin). Hard to say if there is any change, but I like the feel of it. I use it with or without moisturiser. For those reviews who say it is painful maybe they don't have enough fat around their face to act as cushion but I certainly do! At the end of the day it's a nice product and better to use than using nothing at all. I prefer to be proactive rather than watch my jawline disappear ;-) March 31, 2012
Rated 5 out of 5 by aisling genius I have been using this daily for a few months now, but within days my flabby neck had disappeared, it now looks younger & softer, the bones to the side of my neck are now visible making me look younger. My throat area had always been a problem, I had been asked if I had a thyroid problem, I didn't, but no cream or diet (drinking water etc) made my neck look like it does now. It reminds me of when JRM (King Henry) in the Tudors, said beware of a woman who has a neck like oil,or something similar. I see this as a positive thing. There were times when I would wear polo necks just to cover it up. This massager is so easy to use and not at all time consuming. I love it & would recommend it to anyone, with similar concerns. January 18, 2012
Rated 1 out of 5 by Sandijane Disappointed! I read all the reviews first and thought this sounded a nifty gadget. However, like some others, I found that the massager was far too hard and felt like it was doing more harm than good! I would have preferred it if there was a little more cushioning to the rollers as it just seemed to scrape painfully over my skin. So I'm afraid it's going back. November 23, 2011
Rated 5 out of 5 by Jone Super toner I bought this product a few months ago and at first wasnt sure if it would work but like some reviewers I did find it uncomfortable with the first use but as I continued I could see the difference within first use of it and I have discovered that not only is it great for the face but also for my arms but also for my thighs which after using it they have toned down and can really see the results. Definitely a great tool but you wouldnt have thought so if you havent tried it. Thanks Sarah - love it. October 26, 2011
Rated 5 out of 5 by Jewellry WORTH IT Although at first it was stiff to use, I persevered and it works. I find it easier to use with moisturiser on, and. holding the wishbone part of it. Appears to be working fine on me. Just purchased one for a friend, surely that says something. August 14, 2011
Previous2 3 4 5 Next