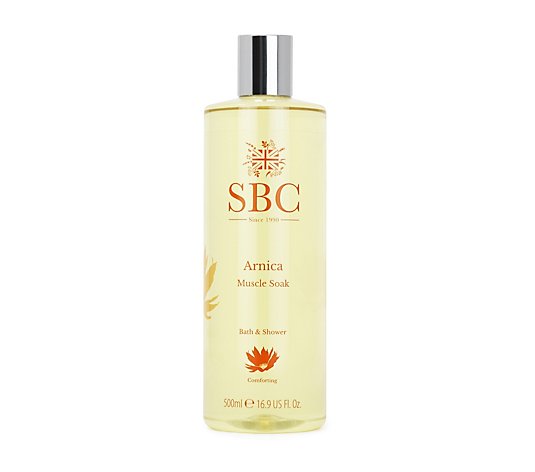 This Arnica Muscle Soak from SBC is formulated to help promote relaxation when added to a bath, as it releases aromatic vapours in the steam, plus it also doubles as an excellent addition to a foot spa, helping soothe tired feet. This soothing muscle soak is the ideal way to create a relaxing evening after a busy day, just pour into your running bath then lean back and feel the tension melt away.

SBC boasts a range of skincare products from soothing gels to bath time goodies. Enriched with nature's finest ingredients, including plant extracts and vitamins, SBC products are perfect for the whole family. Their innovative gel formulas are light, easily absorbed and suitable for all skin types.
Print this page

Rated 4.4 out of 5 by 14 reviewers.
Rated 2 out of 5 by PinkAngel09 Muscle soak I'm new to SBC and bought several Arnica items with the recent TSV, including the muscle soak. This has a lovely aroma and I've had a few relaxing baths with it. However I haven't noticed a significant impact on my tense muscles that is superior to the effect I get from my current bath soak product. I feel the effect of the Arnica shower crème and gel is much better. I'm glad to have the opportunity to try these products, and love the other Arnica products that I bought. However this will is one I'll be retuning. January 02, 2017
Rated 2 out of 5 by GovanGirl Beware Contains Methylisothiazolinone Earlier this year I had a very nasty rash on the skin all over my upper body. After a lot of tests it was narrowed down to an allergic reaction to Methylisothiazolinone. The rash coincided with my purchase of an SBC set which included this product and when I checked the ingredients Methylisothiazolinone was one of them. My skin is now sensitised and I have to use skin products prescribed by my doctor. I'm sure this is a lovely product if you are not allergic to this preservative but please avoid if you know you are allergic to Methylisothiazolinone. August 12, 2015
Rated 5 out of 5 by Annette123 Very nice, but I thought it would be..... I have used SBC for different reasons since before it was first shown on QVC, and I've been with QVC for 20 years, it is a fantastic range. I love the Arnica gel, and I love this soak for my aching feet, they tend to swell in summer during hot spells and I think it has made a huge different in the comfort area with my feet. Would recommend this to anyone. April 02, 2015
Rated 5 out of 5 by Emliam Really Soothing I have a very very sensitive skin and usually stick to Liz Earle products but thought I would try this, I was very pleased my skin felt great after using it and I had no irritation at all. September 16, 2011
Rated 5 out of 5 by crazyme great hydration I have mixed this with the Jasmine & Evening Primrose Shower gel and wow - after each showering session, my skin is sooooo soft and hydrated that at weekends unless I am going out I dont even have to moisturise. I have mixed half and half of arnica shower gel with the evening p/rose shower gel. Try it ! I shall certainly be ordering more and mixing with other SBC shower gels. October 09, 2010
Rated 3 out of 5 by Hunnybun okay Generally I am disappointed in this range except for the arnica products. This particularly product is okay, not sure I would repurchase as its rather runny and sodium laureth sulphate is the main detergent/foaming ingredient which can be drying and irritating. not sure how much arnica is in it but I recommend you keep it out of the sunlight. Is quite useful as a foot soak. generally I think I would buy the arnica gel again and use that instead. August 24, 2009
Rated 5 out of 5 by maygold Soothing relief! I have used this product for several years. It is very soothing and in my opinion really does relieve aches and pains. I have found it particularly good for easing stomach cramps. May 04, 2009
Rated 5 out of 5 by Sydney6 Great for a foot soak I am unable to climb in and out of a bath so now I only use the shower cubicle. I have used this foot soak in a bowl but now I have discovered if I place the 1litre bottle over the plug I can have a foot soak every time I take a shower.Much easier and more convenient. I also find its' OK to use as a shower gel as Alyson suggested once on an SBC show. Try it if you have the use of a shower only but don't flood the bathroom floor!!!! May 23, 2008
2 Next