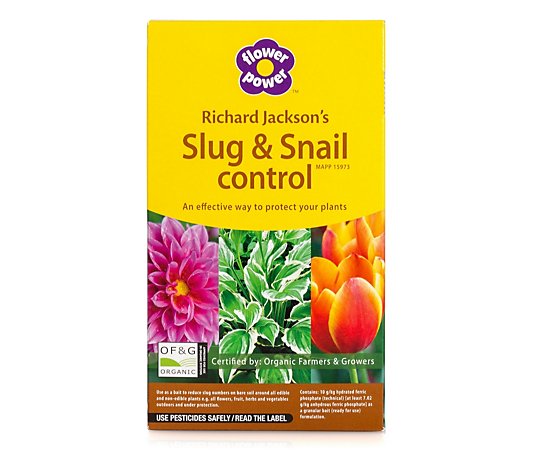 Rated 4 out of 5 by 135 reviewers.
Rated 5 out of 5 by MaxxE slugless garden - at last ! I moved into this house 15 years ago and have had the most snails in my garden that any human being could possible cope with..... I have tried everything... salt, beer traps slug/snail repellents / killers and still their population kept growing ... until this product appeared. I thought it sounded expensive but ordered it just the same as tether was nearing its end ! It only flipping well works... I reckon I might have seen two or three snails since I started scattering the pellets which is nothing compared to what I have had to deal with....come to think of it - not seen one for a couple of weeks now - SUCH a relief because this year my plants haven't been munched - it is fantastic - thank you Richard Jackson ....... July 15, 2015
Rated 5 out of 5 by SheMag Think like a slug I have a lot of hostas which suffered terribly last year, so I got these pellets. Not a single plant has been nibbled so far this season and they've grown absolutely huge! I wonder if some people are spreading them too close to the base of the plant? If you've ever had the unhappy experience of watching a slug or snail eat, you'll know that they take the path of least resistance...they don't push through all the foliage to the bottom of the plant, oh no, they find a leaf tip touching the floor or just above the floor (they can stretch very tall, those beasts) and they munch away from there. So bearing what I saw in mind, I spread a few at the base of the plant just to be on the safe side, then put most in the areas where the leaves are touching, or almost touching, the floor. Result, the pellets disappear (this means they're being eaten, it's not a product fault!) lots of empty snail shells, and immaculate hostas. Like others have said, I wouldn't be without this product. June 21, 2015
Rated 1 out of 5 by jemina dissapointed I use all Richards products , but this slug and snail pellets hasn't worked for me ,I surrounded all my hosta's but it hasn't stopped the slugs eating the leaves.I even put them in seed trays housing cosmos, but it didn't stop the nasty thingies. I am disappointed as all other productsI have bought from Richard have worked wonders, and I have got family and friends using Flower Power . June 13, 2015
Rated 5 out of 5 by lizzidivi Best Product Ever Completely amazing, bought this a couple of months ago. Having previously suffered a decimated garden due to slugs and snails, not only have I got not a single eaten plant but absolutely no slimy trails and no dead bodies. I absolutely will never be without this product - I cant recommend it highly enough June 06, 2015
Rated 5 out of 5 by poddingtonp NO MORE NIBBLES For the first time this year after using these little miracles my hostas are perfect and dont look like they have been attacked with a machine gun ! Have tried everything to deter these pests but to no avail until now and I dont have to patrol the garden at night with a torch and remove the little devils by hand . June 05, 2015
Rated 1 out of 5 by biox Birds love it Purchased Slug and Snail control in February. I have been putting it around my Hostas to control the slugs. I also brought food for the birds. I was looking through the patio window hoping to see the birds feeding and noticed that the birds were concentrated around the Hostas and that they were eating the Slug and Snail control in preference to Bird food. The Snails did not get a look in. June 04, 2015
Rated 1 out of 5 by Gwraigcymrobach Completely Ineffectual After using this product for just over 1 week, my plants have been eaten alive by slugs and snails, my rhubarb has hardly any leaves left!! I am returning this product as it just doesn't work and will revert to using my usual slug control pellets from my local garden centre/DIY store. June 03, 2015
Rated 5 out of 5 by doasido Marvellous product I decided to wait for some time before writing a review.In the areas i used this product it has been slug and snail free and my plants have been given a chance to grow well and not be eaten to death so hence are looking lovely.This product will definately be a repeat purchase. June 01, 2015
Previous 4 5 6 7 8 ... 17 Next