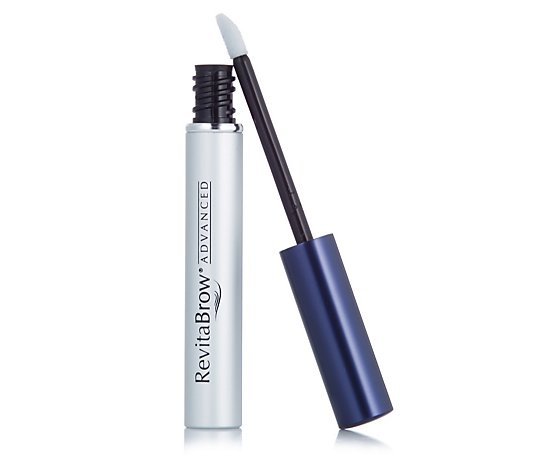 RevitaBrow Conditioner from Revitalash is a unique, revolutionary conditioner to help you achieve thicker and fuller-looking eyebrows. It's the perfect solution for brows that have suffered from either years of over-tweezing and waxing, or simply as part of the ageing process.
Extended 90-day money back guarantee - we have decided to triple our money back guarantee to 90 days on this collection, so that you can fully benefit from trying these great products.

Stock up with Auto Delivery - choose our Auto Delivery option and receive Revitalash Advanced Conditioner once every 90 days for a 12 month period, at this excellent price.

RevitaLash was developed by ophthalmologist Dr Michael Brinkenhoff as a special gift for his late wife, Gayle, who after a long-term illness, noticed her once-beautiful eyelashes looked dull, brittle and lifeless. After extensive research, Dr. Brinkenhoff, together with a team of cosmetic chemists, created RevitaLash to truly give the beautiful look of renewed vitality to eyelashes.

Rated 3.9 out of 5 by 245 reviewers.
Rated 5 out of 5 by Alexarose08 Amazing! I got this in the last revitalash tsv. To be honest i wanted it more for the lash conditioner as my lashes are fair and very sparse ( fair brows too.)I Used every nite and after about 12wks or so the difference in my brows was unbelievable! They were so much darker and longer i actually had to brush them which is new to me! I was missing the end of 1 eyebrow and it is now there . All my friends and family noticed the difference. I cannot be without this product now. Worth every penny. November 27, 2016
Rated 4 out of 5 by lennychichen Does work I plucked by eyebrows in my teens and eventually ended up with barely any eyebrows, so I was pleasantly surprised to find that this product does work, but the downside is that my eyebrows are now almost black and my hair is blonde! Before this product I would pencil in my eyebrows in a colour to suit blonde hair, but now they look too dark and a bit strange because of the contrast. However, I do now have eyebrows, which in itself is amazing, I just wish they weren't so dark. September 06, 2016
Rated 5 out of 5 by Janie123 Amazing ! I over plucked my brows back in the 80s and they never grew back. I was very sceptical of this product but bought it as part of a TSV thinking I could always return it. 6 weeks later and my brows are the best I've ever seen. Thicker, darker with no sparse patches. I no longer need to draw the tail ends on. So delighted. Wish I could upload a photo. September 06, 2016
Rated 1 out of 5 by JaPa PLEASE READ BEFORE PURCHASING I have brown hair and HAD lovely brown eyebrows except for a bald spot due to stress,I thought this would be perfect to try,.After using this for couple weeks i now have jet black eyebrows!!!!!!I absolutely hate it,it looks extremely odd and like other reviewers people ask me if I've tinted them!!! The presentation does NOT mention this at all I would've steered clear had I known this, I wanted my brows to grow yes, thicker bushier the works, certainly NOT a permanent change in colour, extremely disappointed, however if this product had NOT changed the colour I would've kept it, I didn't see dramatic growth but I did see a little which I had to pluck away because it was too heavy and dark in colour for my face.Please be warned if you are on the fairer shades, This has been returned with pleasure, thanks to QVC September 01, 2016
Rated 2 out of 5 by buffy1 Disappointed I bought this as a TSV with revita lash which I know works as have used it before. So I purchased purely for the revita brow. I plucked my eyebrows aged 15 and they never grew back, as I have aged my brows got even sparcer and lost colour. I used every night and after a couple of weeks I did not see growth just that the brows I had went jet black..not attractive as I am blonde. It looks really peculiar. Not sure what's in this formula? Hair dye maybe ..I have never had black eyebrows. Sent it back. September 01, 2016
Rated 5 out of 5 by lorslors Sceptical at first I was sceptical when I bought this. After the first use, the skin around my brows went red like my brows had been waxed so I decided I was allergic and should stop using it. I left it a couple of days and then tried again once a day. After I had built up a tolerance I applied it twice a day. Three weeks passed and I didn't really notice a difference. Then suddenly, I think about week 5, I had GROWTH! After having no growth for about 18 years after over plucking as a teen! I'm not sure if it will last because other reviews say that it falls out when you stop. My brows aren't exactly as I want them but they're getting there. I want to add a photo but can't see where. If I figure it out, it is a photo with the before at the top and the after at the bottom. August 20, 2016
Rated 2 out of 5 by Smiler76 Disappointed Got this as part of a TSV. Loved the revitalash however was slightly disappointed with this. When it came it was really difficult to get the lid off. The inner rim piece was loose. I thought I would still use it though as I was able to close it and was keen to try it. After using it sparingly I was starting to see some improvement after 3 and a half weeks however it was also at this point that it ran out. Considering it is supposed to last 4 months this is very poor. So it's far too expensive for what you get and I won't be re-purchasing. July 02, 2016
Rated 2 out of 5 by shillitoe nothing has changed I have been using this for 14 weeks and on my second tube, but have notice no difference, perhaps my brows have been sparse for too long to recover, but will continue until I have finished the tube I'm using. April 20, 2016
2 3 4 5 ... 31 Next