New to QVC? Use code FIVE4U for £5 off your first order. Start shopping with a little gift from us 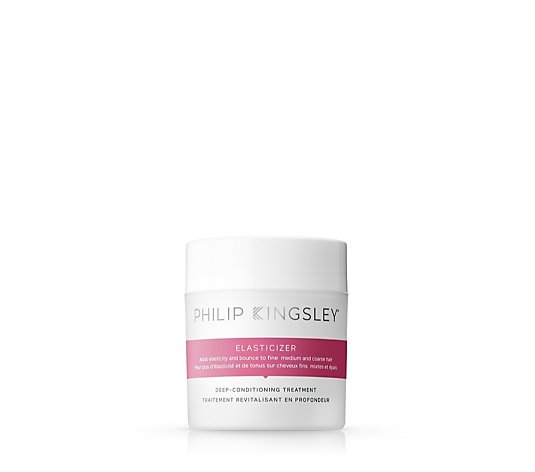 Discover Philip Kingsley's Elasticizer, a deep conditioning, pre-shampoo hair mask designed to deliver a rush of hydration inside the hair cuticle and help increase manageability, while working to smooth the outer layer of the hair shaft and seal in moisture to give hair a sleek, silky texture and shiny look. Formulated to help with numerous issues including dry and brittle hair, frizzy and flyaway hair, dull and lifeless hair, Philip Kingsley's hero product may just be the haircare miracle you've been after.
Specially created for Hollywood royalty -Elasticizer was originally created by Philip Kingsley for Audrey Hepburn, whowanted a super-moisturising treatment that would help replenish her hair andkeep it in great condition throughout the frequent colouring and styling onmovie sets.

Internationally renowned, Philip Kingsley and his team have created expert treatments, plus everyday haircare essentials to help you get the best results for your hair and scalp.

Rated 4.4 out of 5 by 144 reviewers.
Rated 1 out of 5 by Hanholland what a shame... My hair was in such bad condition and really lacking any va va voom so when I saw Alison talk about this product I couldn't wait to try it Being a non fuss kinda girl the thought of putting it in my hair and leaving it to do its magic sounded amazing...then I tried it My hair has never looked so bad after using this it went completely frizzy and had an awful texture. The smell as well is so odd and not nice to use, even my hubby commented on it! I tried putting on more, I tried putting on less, I tried not putting it in the hair net thing and leaving it only 5 mins before washing and nope nothing helped I was so disappointed so sadly had to send back, thanks QVC for the 30 day money back guarantee And just for reference I have medium to long thin hair but lots of it! February 17, 2014
Rated 5 out of 5 by Purespirit7 Complete change of opinion! I purchased the three 75ml tubes in April 2013. I massaging some into my dry, over processed hair. I combed it through and left for twenty minutes. Had a slight improvement and left a lukewarm review. I left the tubes untouched for nine months. I came across them and thought I might as well use them up. OMG... I WAS SO WRONG!!! I wet my hair in the bath, rung out excess water and applied a generous amount and combed it through. On a whim, I decided to wrap my hair and leave over night. The next morning, I rinsed It out in the bath...MY HAIR WAS LIKE SILK! My hair was so over processed, it took this over night treatment for me to see how FANTASTIC this stuff is! I take back everything I said in my old review on the three tubes collection. February 12, 2014
Rated 1 out of 5 by chrisam Disappointed Bought this product after all the rave reviews, but had the opposite effect on my hair. Did it all correctly, left on for between 10 mins to 20 mins, but since trying it atleast 8 times, and only ending up with strangly fluffy/fuzzy hair i'm abandoning using anymore. Expensive waste of money, very disappointed. November 02, 2013
Rated 5 out of 5 by scampihead Brilliant This product has totally transformed my hair. After colouring my hair for years my hair had lost its shine and bounce, after a couple of overnight treatments, my hair feels and looks amazing! Constantly getting compliments, another product that I will never be without, truly brilliant. July 29, 2013
Rated 5 out of 5 by magee1990 USE A FEW TIMES TO REALLY FEEL DIFFERENCE I bought this product last year but after one use I did not feel it did anything so left it in the cupboard. After converting to PK flaky itchy shampoo & moisture balancing conditioner, i thought to try elasticizer again but persevere with it. After 2-3 goes (including one treatment leaving overnight) it really worked wonders and my hair feels like never before. It is so silky and manageable and not at all greasy. PK products are my holy grail (esp. scalp toner!!) Would strongly recommend. July 08, 2013
Rated 5 out of 5 by sweetbuddy never say never, I purchase the 150ml size of this pruduct quite some time ago. (early last year I believe!) I found then that it really did not do much for my hair then at all, so it stayed in the cupboad and has not seen light of day since then. Recently my hair has been really out of condition. Its very fine and coloured, so splits easily and drys up. Not helped at all by strong medication (Chemotherapy). I spied the jar in the cupboard and thought, what have I to loose. I used only a very small amount of the product and only left it on a couple of minutes before shampooing off. The results were nothing short of amazing. Hair lying correctly instead of sticking up all over, shining healthy looking locks at last, and a style that just falls into place the way it was cut. My hair not only looks like hair should, but has made me feel like I should - good! This jar has now been released from its cupboard prision - never to return again! Thank you Philip Kinsley for making me feel better than I have in a long while. March 21, 2013
Rated 5 out of 5 by oscarsmummy Miracle Product! My hair had been driving me potty as it was just lifeless. This was partly due to age related perimenopausal thinning and partly to a bad hair straightener experience here in Switzerland! I have tried Elastizer before but it didn't seem to make a big improvement. Maybe I was 5 years younger and my hair was in better condition.!! This time I put it on exactly as described this morning (maybe I left it 40 mins instead of 20?) and used the cap supplied. Wow! All I can say is it feels like my hair has been renewed. It has life, body and shine. I have used lots of QVC hair products and I think of all of them this has been the single most dramatic improvement. And when your hair is good you have a good day!!! November 08, 2012
Rated 5 out of 5 by archer1 Rescued! Bought this in desperation as my hair was strawlike and breaking lots. I had tried all the store big name damage repair serum and conditioners with little or no effect. This is my second week using the elasctiser and the improvement is already noticible. My hair is soft to touch and though still breaking the rate has slowed down considerably.I will continue with this until my hair is back to normal. October 13, 2012
Previous2 3 4 5 ... 18 Next