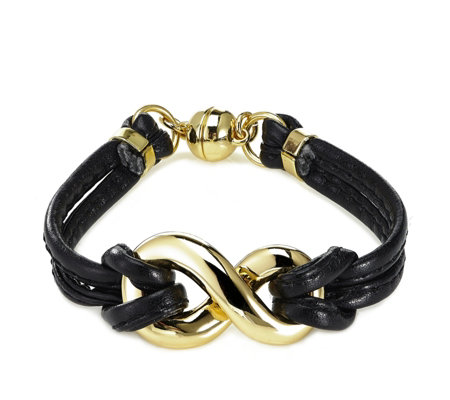 This L'Infinito bracelet designed by Roberto Faraone features an infinity design with interchangeable faux leather straps and a magnetic fastening for easy wear. This piece from Roberto by RFM is an on-trend accessory that will add edge to any outfit.
What's an outlet product? - outlet products are products which we're offering you at a reduced price as they may be returns from other customers or come from discounted ranges. They may not be in their original manufactured condition, however they will have undergone thorough testing before we choose to re-sell them. They may not be in their original packaging and on occasion we will repackage them ourselves. Although the product's original manufacturer warranty will no longer apply, an outlet product will still be sold under our 30-day money back guarantee.

About Roberto by RFM

Inspired by his celebrated couture designs, the latest collection from jewellery authority Roberto Faraone Menella is infused with the same glamour and Italian artistry - but at fashionably affordable prices.

Rated 4.3 out of 5 by 24 reviewers.
Rated 5 out of 5 by Welshdolly51 Very Chic Bought the Black and Gold although absolutely stunning it was too small, I haven`t got a big wrist but it is very small. I have bought quite a few things from this range, it it Bold and Stunning. The gold tone is a very buttery gold exactly like Italian gold would be. More please January 22, 2017
Rated 5 out of 5 by SassyMom Beautiful Bracelet This is really classy and looks more expensive than it is. Bought in the rose gold and really like the changeable straps. Fit's well but I do have slim wrists. September 16, 2016
Rated 4 out of 5 by Sukisue Almost but not quite perfect I bought this in the silver tone and wear the blue and white together. The sizing is perfect on my wrist and, unlike other magnetic bracelets I've had, the catch is really strong. My only small criticism is that the two circles on the figure of eight are different sizes. I think it would look far more classy if they were the same size. That apart, I really like the unusual design of this bracelet and enjoy wearing it. It would also be good if other straps could be bought singly, maybe a red plus some pastel shades. August 25, 2016
Rated 3 out of 5 by cianna Sizing issue!!! Lovely idea but first time I wore it I thought I had lost it but got out of my car and it was stuck on the car door!!!! So will be returning this bracelet as next time I might not be so lucky such a shame as I think it's a lovely bracelet August 24, 2016
Rated 1 out of 5 by Kazbabe5 Too short couldn't fasten I was really disappointed to find that I couldn't fasten this bracelet on my average size wrist of 6 inches and so have had to pay to return it not happy August 17, 2016
Rated 3 out of 5 by joshuababy1 Lovely but oh! Received this today fantastic delivery and this bracelet looked so substancial but oh so small! Yes it fitted on my wrist but not a little bit of wiggle room, just an half a inch extra would have been superb, this has been returned. August 16, 2016
Rated 5 out of 5 by Norbert Versatile piece! I ordered this in the silver tone. I like the fact that I can change the strap from navy to white to suit my outfit. The magnets are really strong and have had no problems with it coming off. Looks really good on the wrist and I am very pleased with my purchase. I would like to see more from this designer in silver tone please! July 26, 2016
Rated 2 out of 5 by Annette123 FAR TOO SMALL I CAN'T STAND ANYTHING TIGHT ON MY WRISTS. I DON'T KNOW WHO THIS IS AIMED AT, BUT COMING FROM AN ITALIAN BACKGROUND, I CAN TELL YOU THE ITALIAN WOMEN DO NOT HAVE SMALL WRISTS - MINE IS NO MORE THAN 7" AND THIS BRACELET WHILST IT FITTED WAS TOO TIGHT. IT ONLY ARRIVED A COUPLE OF HOURS AGO, AND AFTER I TRIED IT ON BOTH WRISTS THOUGH I PARTICULARLY WANTED IT FOR MY RIGHT WRIST, I KNEW RIGHT OFF THE BATT IT HAD TO BE RETURNED. I AM SO SORRY ABOUT THIS, AS I HAVE SEVERAL OF ROBERTO'S ITEMS AND I LOVE THEM, AND THEY DO STAND RIGHT NEXT TO 18CT GOLD ITEMS, SO HAVING TO RETURN THIS IS NOT WHAT I THOUGHT I WOULD HAVE TO DO. I AGREE THAT IF SLIGHTLY LARGER OR LARGE ENOUGH TO BE SLACK, IT WOULD BE TERRIFIC IN DIFFERENT COLOURS I.E. ROYAL BLUE AND PERHAPS TURQUOISE COMBO, AS TI STANDS, HOWEVER, IT'S NOT FOR ME. I ONLY GAVE IT 2 STARS AS THIS IS NOT A BRACELET THAT WILL SUIT EVERYONE, BUT THIS HAS NO REFLECTION ON THE EXCELLENT QUALITY. May 19, 2016
2 3 Next