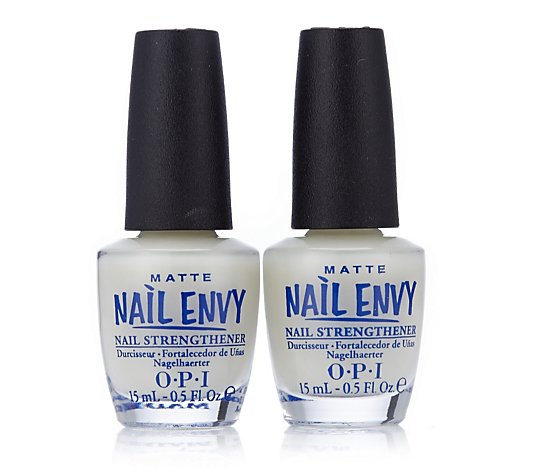 With a matte finish, OPI's ever-popular Nail Envy Matte formula is a 3-in-1 base coat, topcoat and strengthening treatment formulated to reduce the risk of splitting, peeling or breakages and is an ideal conditioning base for your nails. This OPI hero will give your manicure a mattifying twist, while promoting the look of healthy, natural nails.

Nail polish professionals - featuring a signature wide brush with extra thin bristles to achieve smooth coverage in a single stroke, OPI's award-winning nailcare and high-quality formulas can be relied upon to deliver a beautiful-looking manicure every time.

Rated 4.2 out of 5 by 25 reviewers.
Rated 5 out of 5 by Noni Excellent base coat Not only is this a brilliant nail treatment this is now the only product that I use as a base coat. I was struggling to stop my nail varnish from peeling but I have been using this as a base coat since seeing this product demonstrated. So, for me, it is a two in one product as a treatment and base coat as it is not shiny and my nail varnish does not peel and lasts a lot longer. I use the normal nail envy on top of my nail varnish to ensure that my nails are in tip top condition. January 21, 2017
Rated 5 out of 5 by Beckyboo55 Miracle product I was a nail biter up until around 2 years ago when I decided to try and stop for good. I started by having false nails on to give me a head start (not to be recommend I'm sure but it worked for me) and when I had them removed I started applying nail envy. It took only a matter of weeks to see a difference. I kept them filed short at first with a crystal file but gradually was able to grow them longer. My preference is the matte version because it's not thick and it's a beautiful undercoat too. I'll never be without now. October 25, 2016
Rated 5 out of 5 by Teazelwoman Brilliant product, actually works! Oh my goodness, how I wish I'd tried this sooner. I must have bought dozens of various supposed nail strengthening products which have all ended up in the bin as they've all either chipped, peeled off or made no difference whatsoever! This product really works! I've been using it religiously as recommended for about three weeks now and my nails have transformed. They are no longer flaking or splitting and are growing longer and stronger. I really like the appearance of this matte nail envy as it's not completely dull. It gives your nails a slight sheen as if they've been buffed lightly. I'll definitely be buying this regularly. Thank you OPI and QVC. July 15, 2016
Rated 5 out of 5 by buttercup2 Just Amazing! I really have been wanting to try this for years! I finally decided to sort my nails out once and for all, I am in my thirties and I have bitten my nails since I was a young child and I was very fed up with looking at my unsightly bitten nails! I have been using this product for just one week so far and my nails look fantastic, I don't even recognise them anymore! I don't feel embarrassed I just can't believe how this product has completely transformed my nails, they look very healthy and I can't wait for them to get a little longer so I can wear the Opi nail colours as they look fab too. The finish is Matte but does go a little shiny after a few hours, I think this is a bonus cos it just makes my nails look very healthy and clean. I recommend this to anyone trying to grow their nails, there is no going back for me I am converted and wish that I bought this sooner! June 05, 2016
Rated 5 out of 5 by Lizzie44 Fantastic Results Unlike some reviewers I have never had a problem with my nails, however I have often seen Nail Envy shows and thought I'd see what all the fuss was about. I've been using it for about six weeks now and can't stop looking at my nails! I'm fifty four and they've never looked so good. I look like I have a French manicure. I can't recommend it enough. April 17, 2016
Rated 5 out of 5 by Comet1956 Best nail ptoduct on the market. In my opinion there are some must have to have good natural nails. A good crystal nail file ,a four way nail buffer,a good hand & nail cream, an oil treatment for cuticles and , most important OPI NAIL ENVY. This makes the white stand out and protects and improves the nail condition. February 03, 2016
Rated 5 out of 5 by 1966 best ever nail strengthening product I have been using nail envy for years and I would have the nails I have today if it wasn't for this product. If you want long string nails then give this a try you won't be disappointed it's fantastic... November 03, 2015
Rated 5 out of 5 by caitst Matte & Magnificent Being an avid fan of all OPI products their Nail Envy is a true wonder product. I've used Nail Envy for as long as I can remember as my nails used to be thin, bendy, peeling and every problem you can think of!. By using Nail Envy my nails are the total opposite now. So when my father approached me with a problem that some of his whole finger nails were splitting apart, I didn't hesitate in recommending the Matte Nail Envy and so bought him a bottle. He has used it religiously, as per the instructions, right down to below the brush level. He said "his nails have never been this good, ever" and he's 80! So now I'm going to get him re stocked and buy some more. He has been amazed with the results and his nail problem has been rectified. His split nails have sort of fused back together. Thanks OPI from both me and my father. October 24, 2015
2 3 4 Next