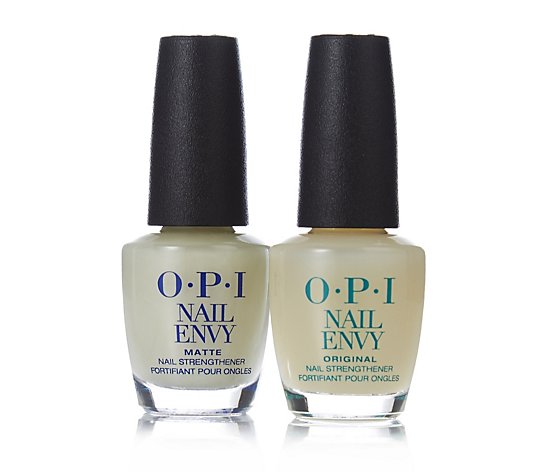 OPI Twice the Envy collection. The set comprises Original Nail Envy Strengthener which helps nails grow harder and resist cracking and splitting, plus Matte Nail Envy which has a natural-looking matte finish. Keep your nails in tip-top condition and looking great with this must-have duo.

Nail polish professionals - featuring a signature wide brush with extra thin bristles to achieve smooth coverage in a single stroke, OPI's award-winning nailcare and high-quality formulas can be relied upon to deliver a beautiful-looking manicure every time.

Rated 4.3 out of 5 by 236 reviewers.
Rated 5 out of 5 by Blossom25 Excellent Bought nail envy lots of times. Never fails to do what it says. All you need to do is actually use it! January 13, 2017
Rated 5 out of 5 by Supportworker2 Very good for looking after your nails I liked this product because l use Matt as under coat and the original as top coat it last a long time and like good August 31, 2016
Rated 5 out of 5 by lokidogy WORKS FOR ME I can not understand the bad reviews for this, I have been using it for over 10 years and it is the only product that works for me and all of my many friends. I am a hairstylist and obviously have my hands in water and products all the time, my nails would not grow as they were so soft, a friend at the warehouse where I buy my products told me to try it, I followed the instructions and within a week my nails began to harden up and much stronger. Now I would not be without it, my only complaint is that you have stopped doing the twin pack of Original only to pair it up with either the Matt or Avoplex, PLEASE bring back just the Original twin pack as I tend to give my husband or son the Matt and do not like the Avoplex. August 04, 2016
Rated 1 out of 5 by Ally1963 Awful Bought this as it was hyped to within an inch of it's life by all the presenters. I have 2 nails which split all the time no matter what I use which is really annoying as I have always been blessed with good strong nails. This product I hoped would be the answer, unfortunately not, it made no difference to the "damaged" nails, it made my nails look discoloured and a nail that I had broken before Christmas refused to grow at all while I was using this product since I have stopped using it my nails are growing and back to their proper colour. Don't waste your money this product is awful. Coincidentally a colleague at work also bought and started using the product at the same time as me with the same results, we have both now binned this product. January 23, 2014
Rated 5 out of 5 by KittKat Beautiful Nails Love nail envy it really works, but you must do it properly if you can’t be bothered this isn’t for you, but if you want to take the time then you will have beautiful strong nails. January 14, 2014
Rated 2 out of 5 by SANDYGURL51 dissopointed I brought this product hoping it would help strengthen my nails after having tips on which completely ruined my nails ai must say they have made them a little harder but they making nail bed yellow colour so I cant just have a natural nail January 05, 2014
Rated 5 out of 5 by Fluffy11 The Best I started using Nail Envy in April as, prior to using it, my nail were very soft and would peal and split at the slightest action, such as buttoning a blouse. Since using NE my nails are strong and grown to a length that I can now use nail polish ( which I was never able to do) - the bolder the better! I use NE every other day as directed and will never be without it. In September I had to have surgery on my eye and prior to going to Hospital was instructed to not wear make-up and to remove all nail polish. Even without nail polish my nails looked like I had had a French manicure, which prompted the Nurse checking me in on the morning of the operation to say I will have to remove my nail polish. When I said my nails were bare, she asked me what I used on them. Later that day as I was being prepared for the general anaesthetic, another Nurse complimented me on my nails and one of the last things I remember before 'nodding off' was saying to her, 'it's Nail Envy from OPI'! October 22, 2013
Rated 5 out of 5 by Mertz Great product After wearing false nails, my nails where starting to break easy and split. After 1 week of wearing Nail Envy I have noticed a massive difference to my nails!! Great that you can still wear nail polish over Nail Envy and carry on with the treatment, even gives the colour a bit more strength so doesn't chip like it normally does. Will be buying more! August 31, 2013
2 3 4 5 ... 30 Next