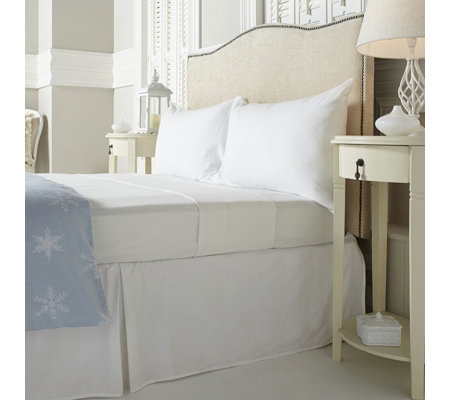 A sheet set from Northern Nights featuring one flat sheet, one fitted sheet and two housewife pillowcases, all in a solid block colour. In warm and cosy brushed cotton, this set is perfect for transitioning a light duvet set into the winter months.

The price above will initially display the lowest and highest priced options. The price for your choice will be shown once you select your preferred option


All measurements are approximate

Make your home a sanctuary with luxurious bed linens, duvets and pillows made especially for QVC. Featuring the finest natural fibres and fillings, Northern Nights surrounds you in premium comfort, transforming your home into a soothing retreat.

Rated 3.8 out of 5 by 8 reviewers.
Rated 5 out of 5 by music Excellent value This is my first purchase of Northern Nights flannel bedding. It is lightweight, warm and oh so soft! No bobbling just lovely smooth bedding. It does not look creased after use. I did read the other reviews so used a liquid wash for delicates but at 40 degrees. Still soft and minimal ironing. November 29, 2016
Rated 5 out of 5 by kayfdee Cozy One of the few things I look forward to each winter is sleeping in flannel bedding, bought 2 of these sets and they are soft and cozy. I followed a tip I read on the Internet and washed each set first in half a cup of vinegar before giving each a normal wash - no softener but finish drying in the tumbue drier when almost dry to leave them soft. Have had no piling or fluff on the carpet. February 28, 2016
Rated 4 out of 5 by Tyler57 STICK WITH IT - THE BOBBLING DOES SUBSIDE Great sizes available... I regularly go for the Superking so that my other half and I have equal coverage! Our set also Bobbled - even after it was washed before first use - which did surprise me. It's the first time it has happened with any Northern Nights bedding I have. After a few more washes the set finally stopped shedding - hence only the four stars! It won't put me off ordering more sets of Northern Nights Bedding in future though. I am one who really suffers in the colder weather and I do so like to be as warm as possible in bed during the coldest part of the Winter, so the flannel sheets are ideal. Just wish these sets came with four pillow cases instead of two as we use two pillows each & I like my bedding to be co-ordinated! February 21, 2016
Rated 1 out of 5 by isi1657 major bobble! I have bought flannelette sheets for more years than I care to think about. This set is the dearest and sadly the worse! The amount of ' bits' on the bedroom floor in the morning has been horrendous. I have had to get out of bed in the night to swipe the bobbles away there has so much!Tried in the tumble dryer and hanging outside to dry- no difference at all. They are warm as you would expect but an expensive way to litter the bedroom floor. Would send them back if I could but am outside return period. December 14, 2015
Rated 1 out of 5 by Msscatty Still bobbling 8 weeks later I was really looking forward to using these flannel sheets, as all our bedding is Northern Nights so used to the lovely quality and we know to grab Superking when we see as usually out of stock. However these sheets are such a disappointment. I expected a little bobbling for the first wash, but eight weeks later they are as bad as the first wash. I've had to throw out all my bed socks as the bobbling has attached itself to my socks, and the amount of bobbling at this stage is unbelievable. I should have returned and not persevered believing they would get better after a couple of washes. A very costly mistake! November 24, 2015
Rated 5 out of 5 by mm581 Lovely and soft I love them, I have two sets in different colours. I always wash and tumble them before I use them and find you don't then get the bobbling/fluffing. They are so warm and cosy, it's a dream to snuggle into bed. October 31, 2015
Rated 4 out of 5 by Yuki Snug I wish I had this type of sheeting set earlier, always thought of flannel as being that horrid stripey, thread bare stuff as back in the 60's . Anyway pleased so far with the set. No serious fluffage issues, and they washed up fine, some bobbling but that's to be expected with a raised pile. And I sleep much better in them, not waking up in the night so often. October 03, 2015
Rated 5 out of 5 by anita fabulous bedding This bedding is soft warm and makes you remember your childhood. January 27, 2015
1-8 of 8 reviews