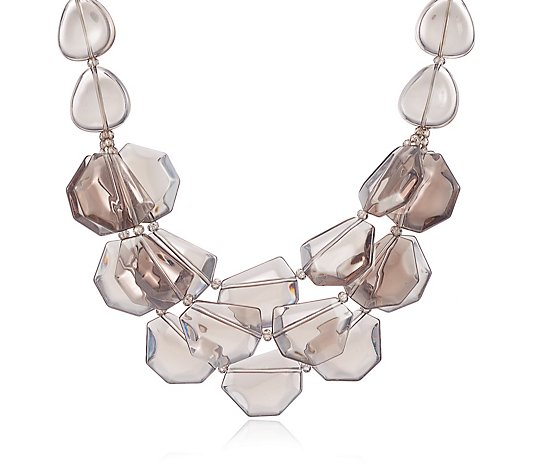 This versatile, fashionable range features easy care, easy wear designs that are smart and elegant. The MarlaWynne range, influenced by European designs, boasts great cuts in luxurious knits and flattering fabrics that are ideal for busy, active women who don't want to compromise on style.
Print this page

Rated 4.5 out of 5 by 11 reviewers.
Rated 3 out of 5 by 1Tosca1 Nice necklace but.... The necklace was well made. However, the one I received was covered with dark make-up. I had bought it to wear to a wedding, so did not have time to await a replacement. As usual, customer services were very amenable. I did clean it before returning, but decided not to wear it, noting the reason for return. A small oversight by the usual stringent standards set by QVC. July 14, 2016
Rated 4 out of 5 by LadyLJM Lovely but expensive Bought this necklace after seeing it on the models a few times. I do think it is very expensive for what is, afterall, just plastic. Having said that it does look lovely on. I now have to decide whether to keep it or send it back. Decisions, decisions!! July 13, 2016
Rated 5 out of 5 by CardiffGal Striking statement necklace A bit expensive for the quality of the 'stones' but you're paying for the striking design. I bought the taupe/off-white version which is wonderful with a simple dress and no other jewellery. Really makes a statement. Love it. July 09, 2016
Rated 5 out of 5 by Flygirl A go to necklace I saw this on the models with various other fashions and wanted to purchase- then which colour to buy- I liked all of them. In the end the bone/tape called most as I wear a lot of neutrals- not a disappointment; most commented on necklace other than the bullet necklace. Try it June 26, 2016
Rated 5 out of 5 by kilkenny1 lovely Having received some money for my Birthday, i decided to buy this necklace and it was also on easy pay, i am very please with it it is beautiful on, it is a bit pricey but the easy pay helps, i will buy one of the other colours if it go back on easy pay again, March 17, 2016
Rated 5 out of 5 by chitchatlady Wow Factor If Im honest think these necklaces are a bit expensive for resin....however.....look fantastic on! I have all 3 colourways and love them all Look great over plain tops and under suits. Would love if Marla would make them in pink ...fushia pink graduating to pale pink.....The design just works. highly recommend. March 15, 2016
Rated 5 out of 5 by kooki STUNNING I have this in Taupe/Bone and I have now ordered the Black/Bone as it was on EASYPAY again. I LOVE this necklace. Looks amazing on. Brightens up the plainest of tops and dresses. I have a few of Marla's necklaces and bracelets.....Love them. I only purchase when on EZP.....More of these please on Marla's fashion and jewellery ??? February 29, 2016
Rated 3 out of 5 by Daisy59 Disappointed! I have seen this several times during different presentations, and it did look nice with the last TSV for Marla Wynn which I bought. I ordered the bone coloured one which when arrived the cord was broken! Not very happy obviously no quality control check done. I had also ordered the black and cream. I wasn't struck with them I think they are plastic as they are not heavy. I also think it is overpriced. November 20, 2015
2 Next