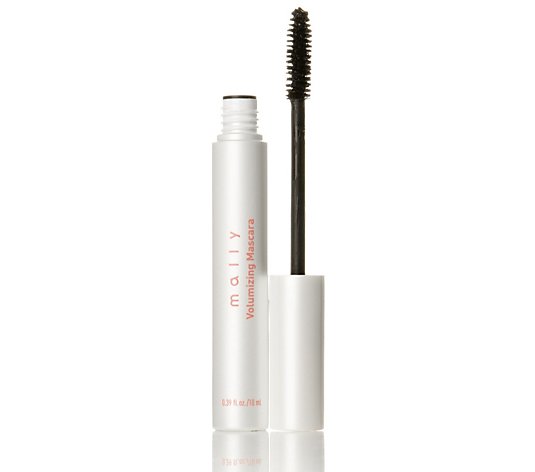 Get the ultimate dramatic false-lash look with Mally's Volumizing Mascara (10ml). This water-resistant formula is an easy way to get gorgeous, full lashes that last. The plush brush helps you achieve the desired effect and build volume beautifully.

Rated 3.3 out of 5 by 71 reviewers.
Rated 2 out of 5 by Carolinda Long lasting but that's all This mascara stays put all day, but I could not get it to lengthen my lashes anywhere near as well as my Clinique Feathering mascara. However, I decided to keep it as it provides my favourite mascara with a waterproof coating. The brush was also very hard which I didn't like. January 12, 2017
Rated 1 out of 5 by HappyHappyJoyJoy Very disappointing Need at least 2 coats to get any kind of volume. Unfortunately finding the optimum period of time before applying the 2nd coat is very hit and miss - apply too soon and the mascara becomes really clumpy and you end up with the classic 'spiders' legs', wait too long and the mascara is then so dry it won't take another coat and instead you end up dragging your lashes all over the place. It's also not easy to remove with my usual eye makeup remover - takes 2-3 attempts to get it all off. Won't buy this product again. November 11, 2016
Rated 1 out of 5 by NURSEJEWELS Disappointed Have been purchasing this mascara for years...... Oh dear, what has happened? Very different formula. +++ product around neck of bottle. I was covered in mascara! Won't be purchasing again I'm afraid. Have tried Tarte Maneater and I'm quite impressed! August 31, 2016
Rated 1 out of 5 by glossgal Car crash! This has been my mascara of choice for years for evening- it gave my lashes a lovely rich thick look. My last purchase can only be described as a disaster! Thick, sticky product everywhere, had to wipe the wand several times just to be able to use it and the finished look was awful. The product is so heavy it weighs the lashes down. The formula has clearly changed and I'm surprised Mally would put her name to it? July 21, 2016
Rated 3 out of 5 by Cinzia unfortunatel I wholeheartedly agree with previous reviews regarding Mally's mascara.! The first one I bought was, I thought, the ultimate mascara so of course bought another Oh the disappointment - it is too thick, too much on the brush which makes the brush unmanageable and by the time I get home from work - 4pm I have two black eyes where mascara from the top lashes (I only coat the top lashes for work) are. under my bottom lashes. It looks awful. What has happened to a favourite mascara. Also it is messy around the top of the tube! June 19, 2016
Rated 4 out of 5 by PSBlogger Good to start with but thickens quickly I have used two tubes of this mascara and have had similar experiences each time. The first two applications are absolutely wonderful: my lashes are coated evenly with a natural-looking layer that gives length and volume. However, the applications after that have seen the product thickening and causing clumps on my lashes. I also find it flakes off onto my face during the day - in my job I don't get the chance to look in the mirror all day and I work with the public so I don't know about any make-up malfunctions until it's too late. I used to be able to rely on this mascara but it doesn't seem to stay usable for long. Such a shame - I love Mally's products. Maybe it is a production/ingredient change as other reviewers have suggested, but either way it has left me feeling unlikely to reorder. February 15, 2016
Rated 1 out of 5 by Jet1 What has happened? Been a fan of this Mally mascara for ages and thought I had found "the one"! Sadly not. The consistency has changed. It is thick, too much comes out on the brush and to top it off the brush came off inside the tube so has had to be discarded. Such a shame, but why the change? Will not be buying again. November 06, 2015
Rated 5 out of 5 by Milanista Brilliant mascara This is the only mascara I use now as it truly delivers great results with just one coat. Can't recommend highly enough! October 25, 2015
2 3 4 5 ... 9 Next