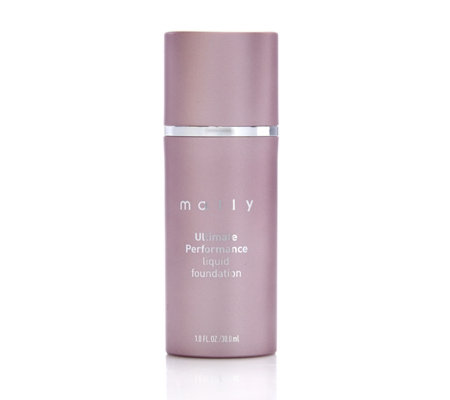 This transfer-resistant foundation provides coverage for your skin in a lightweight formula. For a beautiful complexion all day long apply this Mally foundation. Contains:

Rated 3.7 out of 5 by 95 reviewers.
Rated 4 out of 5 by Bannockburn24 Worth trying I got this product as part of the recent TSV. I really like this foundation as it is light weight and makes my skin feel really soft! I would agree with the comments that it is not the fullest coverage foundation I have ever tried but you can build it up and I like that you can still see your skin. A little concealer on the trouble areas and your good to go. Also it is one of the few foundations I've tried that I don't feel the need to put powder over the top. April 13, 2012
Rated 3 out of 5 by JMR71 Could be better Ordered this in the 'fair' option as I have pale skin and find it very difficult to get a foundation that isn't too dark and orange in colour. I was very pleased with the colour as it was light and very natural and I thought great, but I was a bit disappointed with the texture, I found it very difficult to apply and blend as it seemed to dry very quickly. I have oily skin and I tried it with and without primer but it didn't make much difference. The cost is more than I would usually spend on a foundation so I was expecting this to be the perfect one. April 13, 2012
Rated 5 out of 5 by LivB2 Brilliant Foundation Wow, even coverage, smooth finish. Fantastic over the Mally primer. Pores are minimised and skin is sliky soft. Great value. More TSV from Mally please. April 13, 2012
Rated 3 out of 5 by lennychichen Ultimate Performance Foundation I got this as a TSV and chose the medium colour as previously I had a foundation in fair which was a bit too light. However the medium is a tad too dark but should be okay for the summer when I have a tan. The coverage is good and the foundation lasts well too. April 12, 2012
Rated 4 out of 5 by Globcktt Get the correct shade! I bought this as part of the Mally's TSV collection and was disappointed with the shade that I had been advised to purchase on QVC. I would consider myself to be a similar colouring to Malintha (the Asian model on the programme) or NC 42 in the MAC range and on watching the TSV, Mally & the presenters recommended that anyone of Malintha's colouring should go for the 'rich' foundation so that is what I did. However, the shade was for a much darker skin tone and it had orange undertones so it made me look like I'd been 'tangoed' which was not at all flattering!! Despite the shade, the texture and application went on really nicely and I would say that it has a more medium to full coverage, so had it been the right shade I might have kept it! April 12, 2012
Rated 1 out of 5 by JackieL Part of recent TSV The recent TSV had 5 products, 4 great and 5*, but the foundation is poor. I used it with Elemis pro collagen, Laura Geller Spackle primer - the foundation just sat in my pores and looked patchy. If you are a fan of Bare Minerals and Laura Geller Foundation do not buy this. April 12, 2012
Rated 2 out of 5 by Rosetintedspecs Ho hum............ Saw this and Mally was raving about it. Colour was great on my skin - I have trouble colour matching foundations so was pleased with that - but......the coverage was not enough for my liking and the texture was a bit slimey for me. April 11, 2012
Previous 8 9 10 11 12