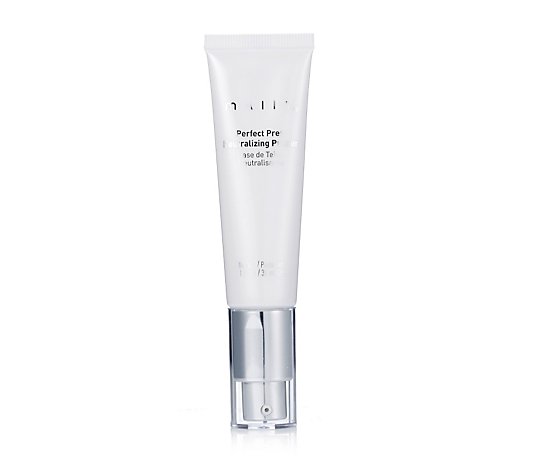 The Perfect Prep Neutralizing Primer is a colour-corrector that neutralizes sallow tones, redness and veins and glides on to minimize fine lines and wrinkles, locks make-up into place, and dries to a flawless, long wearing finish. Use it alone or under make-up for a just applied, super-fresh look and see how your skin looks instantly more radiant, smoother and even.
Contains: How to:

Rated 4.3 out of 5 by 17 reviewers.
Rated 5 out of 5 by LiLi30 Fab find I was looking for a new primer to replace the bare minerals primetime neutralising that I had been using, I love mally's poreless primer but I also need something to deal with redness so when I saw this and after seeing the good reviews I gave it ago, so glad i did it worked brilliantly to tone down my redness and gave my face a lovely dewy glow. Best results seem to be if you allow the product to sink into the skin for a minute or two before applying your base. January 24, 2017
Rated 2 out of 5 by Greenly Disappointing I have tried pixi primer which I didn't get on with, so held out high hopes for this one. But again I didn't like the colour it has. It didn't provide a smooth canvas either. I have had spackle, benefit and think I should stick with my all time favourite which is the mally primer in the tub. Nothing else feels as good as that one!! But great you can try with qvc. January 14, 2017
Rated 5 out of 5 by Beautilicous Whoops, she did it again! Wow Mally! I absolutely loved this primer from the first application. It's so good that I had to think twice about bothering to use Mally's Evercolour Poreless Face Defender Boost to finish my makeup look and I never usually have that dilemma. This primer goes on silky smooth and feels slightly cooling to me which makes it great as a makeup base. It looks good on its own and I have a light bronze skin tone. The illuminating effect still works after you apply your foundation and it does aid the ease of application of your foundation /makeup. I was smiling throughout my regime as I was so impressed with the product's effect but when I took a proper look in a mirror with better access to daylight I was blown away by how 'airbrushed' my skin looked (and I do not wear heavy foundation). So, again, wow Mally! I should not be surprised after having had fab results with the Mally Glow primer in the past. This primer, however, is a step up and helped keep my oily skin from shining too much throughout the day and it makes me look more awake and vibrant even after a bad night's sleep and it's always good to complimented on your skin. Will definitely repeat purchase. Give it a go - I hope you'll be wowed too. October 06, 2016
Rated 5 out of 5 by Windy01 Simply the besthe primer ever Mally mally mally thank you so much this is the best primer I have ever purchased So good I don't need foundation just a dab of It cosmetics bye bye eye bags but used on my age spot along with benefit lemonade and I'm good to go all day September 10, 2016
Rated 5 out of 5 by Stan2419 Fab primer Been looking for this all my life, have tried the rest now try the best. I can use it on its own for just a casual look or under my makeup which then stays put for ages....just super. So happy will never be without this now !! July 22, 2016
Rated 5 out of 5 by thecarolinas perfect it is got this in the recent TSV and I have to say it surpasses all expectations. I love it and am so glad I got two of the TSV when it was on. This is wonderful glides on and gives enough finish to be worn on its own which is what I do if I am not going out. The best primer I have ever used without a doubt. June 12, 2016
Rated 5 out of 5 by Suzi13 lovely primer I received this in a TSV set and must say I am really impressed, it gives the skin a lovely finish. I was using Wow which I like a lot but actually think this is better. June 03, 2016
Rated 5 out of 5 by zoecat40 Works like magic! Got this in a special value set, and wasn't expecting much from it. The other items are a fairly mixed bunch - 'meh' lipgloss, so-so liner, rubbish mascara - but this is nothing short of miraculous. Lines around my eyes are blurred out within a couple of minutes, and though I hardly ever give out 5 star reviews, this product has earned one! May 29, 2016
2 3 Next