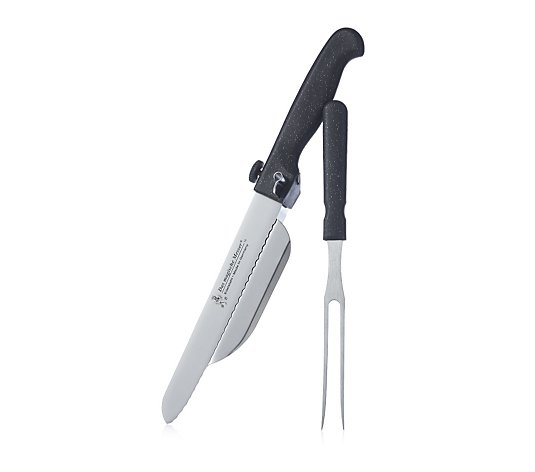 The Adjustable Universal Cutting Knife from Magic Knife is made from high-quality molybdenum steel and features a special guide bar for uniform cutting and peeling. Cut exactly what you want in the kitchen with this washable knife, available in left-handed and right-handed options.

Rated 4.5 out of 5 by 6 reviewers.
Rated 2 out of 5 by sinfonia Not for me I was really looking forward to receiving this knife. Reading the reviews I was aware it took a bit of time to get used to and I was prepared to persevere. However, after three weeks, try though I may, I could not master it. No matter which angle I held the knife, no matter what I was cutting, whether it be tomatoes, cucumber, onions, cheese, meat or bread, each slice got trapped between the knife and the guide and I had to physically remove each slice before going on to the next. Proved to be very laborious and time-consuming, so it was returned. January 27, 2017
Rated 5 out of 5 by Blue60 Great knife This knife does take a little mastering but once you know where to position the slicer for bread, joints, etc., your away. I tried mine for the first time last Sunday to cut a small beef joint and it was a joy to use and I had lovely even slices. I tried it again today on a small, very fresh, wholemeal loaf and the first slice was a bit on the thin side so I adjusted to a thicker cut for toasting and it worked brilliantly. It doesn't take long to get used to. December 13, 2016
Rated 5 out of 5 by blueboy1 No more uneven slices An excellent knife for the kitchen whether or not fitted with the adjustable part. When used with the adjustable guide it will give wafer then slices of bread etc. November 30, 2016
Rated 5 out of 5 by LeicestershireLass143 Useful Purchased this recently and although its takes a bit of getting used to once mastered its brilliant. I use it for far more than simply slicing bread as with the other reviewers and have equal success with what ever I slice October 22, 2016
Rated 5 out of 5 by Veecee Brilliant Bought one of these years ago from QVC, have used it every day on homemade bread, which is notoriously difficult to cut. Thought the accompanying fork would be too small to be of use, how wrong I was, I use it every time I want to carve anything and I wouldn't be without either of them October 10, 2016
Rated 5 out of 5 by greengran Must Have Product I have had one of these knives for years. It is a must have for anyone who bakes their own bread. It is still as sharp as it was when I first bought it. Brilliant knife. October 10, 2016
1-6 of 6 reviews