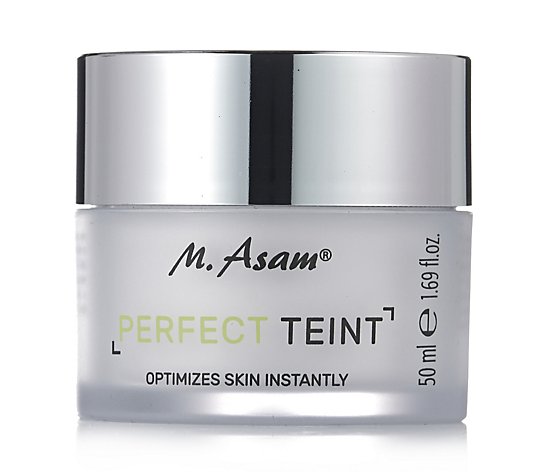 The latest formulation of M. Asam's hero product, Perfect Teint II contains a retinol-peptide complex and has been created to temporarily reduce the appearance of wrinkles and open pores, acting as a temporary filler for the skin and giving you a matte finish to eradicate shine. Perfect as a base for make-up, this easy-to-use product will simply wash off when you cleanse your skin in the evening.
Contains:
How to use:

M. Asam creates luxurious, anti-ageing skincare for all ages, and every product infused with cold-pressed grape seed oil from their own family vineyard.

Rated 2.5 out of 5 by 61 reviewers.
Rated 1 out of 5 by Dibble Doesn't work ! This is the first product I have ever returned to SVC. It's rubbish and does nothing. I've tried over, under Make up, moisturizer. It's a rather unpleasant texture as well. I don't have very deep wrinkles so it really should have made a difference. Don't buy it and save the wasted postage. January 19, 2017
Rated 1 out of 5 by irene1314 Not a miracle Wanted to like this product so much, but not the miracle find I was hoping for. Cream was a nice consistency but after applying it felt a bit greasy. It didn't roll off as some others reported and it took a lot of attempts to get the right amount. But it did nothing for the areas i wanted it to fade. Lines were no different after application. Had to return. Still looking for that miracle cream I'm affraid. January 18, 2017
Rated 4 out of 5 by s0phie worked for me After the amazing presentation I read the mixed reviews and was undecided whether to buy. I eventually ordered after it was aired again....im glad I did it works for me!! Once its on don't rub or touch it as it crumbles off, i have tried it under and over makeup and it has great effects either way January 03, 2017
Rated 2 out of 5 by meril dry Initially, I thought the product good, but after more use my skin got very dry. I have tried it all ways under makeup, over makeup, under moisturiser, over moisturiser without much success. December 31, 2016
Rated 3 out of 5 by Zabe Good for scars Having previously bought this to use on lines and wrinkles I returned it as every time I smiled the product cracked and rolled off in white blobs. A couple of months ago I had a lump removed from my forehead and was left with a deeply indented scar. I repurchased this product..... because the scar isn't on a line or wrinkle that moves I have been delighted..... it has softened the intent and the scar dramatically! ( obviously it hasn't healed the scar, it just blurs it) It does still blob off and the product does need to patted back in or reapplied during the day..... but hand on heart for use on the scar it has been brilliant! December 10, 2016
Rated 1 out of 5 by RB1952 Very disappointed This product made no difference at all. Have used a similar product which is amazing but in a very small tube and does not last long. Sent back straight away November 06, 2016
Rated 1 out of 5 by holidayruin Not for me Having watched a few presentations of this product I was keen to try it out for myself. I smeared it on cleansed skin..... no difference to my fine lines on top lip, I tried again after moisturising...same non result and thenI tried again over my fully made up face....same non result. I may be doing something wrong as there are several glowing reviews. Perhaps I was expecting miracles. I am hugely disappointed with yet another P&P wastage as I am sending back. October 30, 2016
Rated 5 out of 5 by Zoey9 wow it's real It was waiting for me when I got home from work. I was sweaty so put it on my face just lightly swiping and it worked half my face was perfect the other sweaty. OMG I didn't realise I looked that bad sweaty! It took away my pores too and an old scar. October 13, 2016
2 3 4 5 ... 8 Next