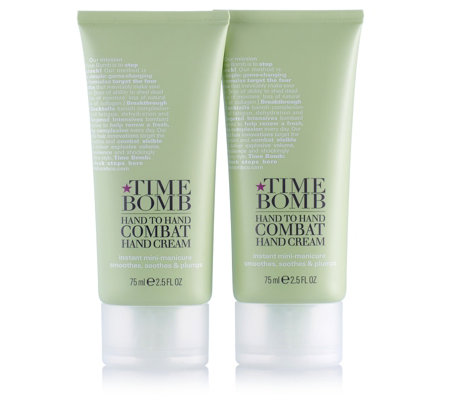 "I have been relentless in my pursuit of products that would help combat the appearance of ageing - I've been using my own concoctions for years. Because I have been asked so many times about what beauty products I use on my skin, I decided to make my formulas available to everyone. I hope you like them and are as happy with the results as I have been."

Rated 4.7 out of 5 by 65 reviewers.
Rated 5 out of 5 by DrWalter Yes, it's for men too. Yes, TIME BOMB HAND-TO-HAND COMBAT HAND CREAM is for men too. Finally, I have discovered a non-greasy, easy-absorbed, elegantly fragranced (the addition of Olive Oil is genius!) and subtly-glowing hand cream that regenerates my hands (and I even use this across my neck too after shaving). It does so instantly and reassuringly that I have been choosing this cream as a post-tan aid. As a fifty-something out-in-all-weathers cyclist it is now part of my essential skin-care toolkit. Lulu, how about producing a 200ml 'pump-action' format so it can sit next to the kitchen or bathroom tap as the definitive post-wash hand-cream? September 23, 2016
Rated 5 out of 5 by Holbie Love this hand cream! My hands suffer as i am constantly washing them, so I like to use a lot of hand cream, and have tubes all over the house! This one from Lulu is one of my recent discoveries - I love the gel like texture, which sinks in really well without leaving a greasy residue. It has a very delicate lavender scent, and leaves my hands feeling soft and hydrated. Great to see it in a duo! August 16, 2016
Rated 4 out of 5 by LisaC Disappointed: lack of product in tube! As stated in other reviews, I was so excited to use this hand cream as the reviews are good, but when I received the tube duo, both were half full and unsealed. I complained to QVC who replaced the products straight away [very good customer service] but again both tubes are half full and unsealed. The hand cream itself is really nice and your hands look wonderfully refreshed after using, but I feel the combined amount of product over the two tubes would only really fill one, so you're gaining nothing by ordering the duo at all! This is the second time I've been disappointed with Lulu's product packaging [previously ordered the Collagen Bomb and the pump didn't work at all]. Sadly I will be returning this cream as if the idea is not to give the customer x2 75mls it should either be sold as a single handcream with a full tube or a duo in smaller travel size tubes! May 01, 2016
Rated 5 out of 5 by Beautybell Correct amount of product? I have purchased this hand cream before and rate it highly. Had this delivered today and my first impression was that it did not feel like 75ml . When the tube was held up to the light it was clearly just over half filled. QVC has kindly agreed to replace it, but disappointing that I have to return it. March 30, 2016
Rated 5 out of 5 by 43something i don't think you ll find a better hand cream I got this product as part of a TSV just before christmas. I' ve not used any of Lulu's products before and wanted to try. I can honestly say from the very first application my hands felt flooded with moisture and looked for the first time in ages youthfull with no dryness or signs of aging and really healthy! :-) I m in my early forties and have started to witness a change in my skin's texture. This product reverses the effect of time. I am a big fan! January 09, 2016
Rated 5 out of 5 by girraffe246 the best having tried loads of other hand creams thought i would try this not holding out much hope for it. I was so wrong, soaks in straight away not greasy at all and feels it is doing good for your hands. Can we please have it in a larger size. March 17, 2015
Rated 5 out of 5 by Fifi Best hand cream ever! I have tried many brands of hand cream,one a top selling brand from QVC and it was awful greasy and didn't absorb ugh!Lulu's time bomb hand cream is a little miracle in a tube,it does what it says 101%.My hands were really dry and rough but after just two applications its as if I have new hands lol,the cream is easily absorbed and my hands are really soft and hydrated,would highly recommend this product its brilliant. February 27, 2015
Rated 5 out of 5 by Sida good product shame about tube This is a very good handcream that does what is says on the tin.....the only fault that I have found is that it helps to make your nails and cuticles so much better then you break them when the tube is 2 thirds used as you just cant get it out because of the stiff top unless you cut off the bottom, couldnt take of any stars though as its a great handcream. July 31, 2014
2 3 4 5 ... 9 Next