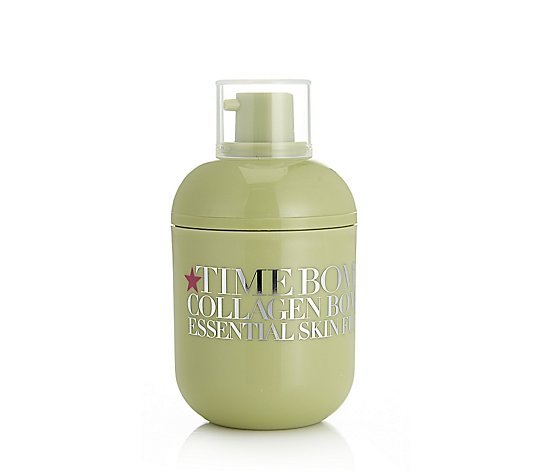 Highly charged with collagen, this formula is excellent for women over 30 to help their skin appear fuller and firmer, helping to target the signs of ageing. Give your complexion a hydrating boost with Collagen Bomb from Lulu's Time Bomb range. Contains:

"I have been relentless in my pursuit of products that would help combat the appearance of ageing - I've been using my own concoctions for years. Because I have been asked so many times about what beauty products I use on my skin, I decided to make my formulas available to everyone. I hope you like them and are as happy with the results as I have been."

Rated 3.4 out of 5 by 68 reviewers.
Rated 2 out of 5 by mishey51 not fantastic I thought that i would give this a fair try however it doesnt deliver, its a nice consistancy but im afraid it doesnt give any visible results, wouldnt buy it again.Im a strong believer that nothing you put on your face will help wrinkles it will only moisturize your face . January 31, 2016
Rated 5 out of 5 by Nettij Fabulous I bought this way before Christmas when it was product of the month after using it for just one week this little bottle of magic made my skin looked plumped and youthful, so I bought another whilst it was on offer. I am still using the first one and I use it twice a day so great value for money. I would not like to be without it now January 14, 2016
Rated 5 out of 5 by Nancy33 Brilliant I love it.Was a bit nervous as said problems with pump.But brilliant.Good buy December 27, 2015
Rated 5 out of 5 by Linhlinh Leave the bottle upside down I got this collagen from TVs and got the same problem, but I try in different way, let the bottle upside down over time, and it work ,try it December 07, 2015
Rated 3 out of 5 by povestar Great primer! Bought this as beauty pick of the month. As a primer it is great, my Bare Minerals looks better than ever. Problem, I have other primers and I got this to change the texture of my collagen depleted skin. I have used collagen bomb morning and evening to make sure I gave it a chance but I don't see a difference when not wearing make up. Thirty days is almost up and I think it is too expensive just to be another primer so l will probably send back. No problem getting out though. The delivery system on my 50ml size worked fine. November 29, 2015
Rated 1 out of 5 by Tinks1987 Disappointed Was hoping for a visible difference in my skin but no, nothing has changed or improved! Very disappointed too late to send back as I kept using/trying it, wasted my money November 22, 2015
Rated 2 out of 5 by Tatters Terrible Packaging. This cream is lovely, light, and absorbs into the skin quickly, unfortunately getting even the smallest amount out of the bottle is a nightmare. I pumped until my fingers were sore, and only managed to get a pea size out. The following day I tried tapping, and even resorted to banging the bottom of the bottle but to no avail. It is such a shame that the advantages that could be gain by using this cream is let down by rubbish packaging. I have since returned my bottle, and will not be ordering this again unless in a jar or tube. November 15, 2015
Rated 3 out of 5 by Dottilotti Faulty pump. I do like the cream. My lines are less visible but like other reviews the pump is a big problem. Stopped working after a couple of days so I had to cut top off to get to it. Perhaps it would be better in a jar. November 14, 2015
Previous2 3 4 5 ... 9 Next