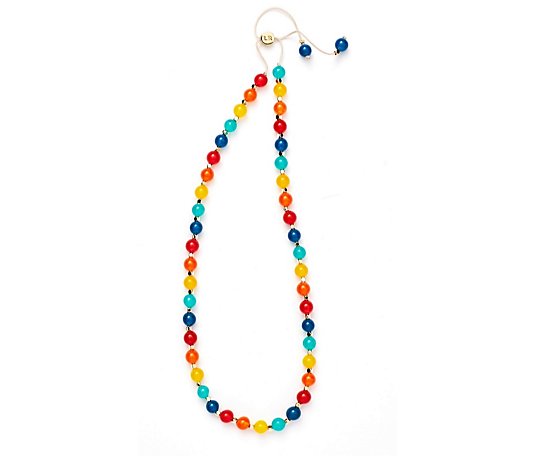 Lola Rose was founded by Nikki Gewirtz MBE in May 2000 with just one design, the tumble stone bracelet. It was snapped up by several high-end London stores and the company went from strength to strength, now making a regular appearance on the red carpet. Nikki has a philosophy of 'affordable luxury', making her customers feel wonderful by bringing colour, glamour and a smile with every purchase.

Rated 4.7 out of 5 by 22 reviewers.
Rated 5 out of 5 by bellabeau beautiful necklace I have become a bit of a Lola Rose fan over the past year or so & this lovely necklace is a beautiful addition to my growing collection! I ordered the sea shell option and it is just gorgeous in its simplicity. Another quality piece from Lola Rose . October 08, 2016
Rated 4 out of 5 by Snowbunni Let down by the fastening This neclace is quite simply beautiful, I have it in the Botswana agate the colouring of which make it super versatile the size and cut of the stones perfect, but unfortunately it's let down by the new fastening proving the old adage "don't fix what's not broken!" It is so aggravating that it will not stay put at the length you've set it at. It is too beautiful to return and I will be keeping it along with the matching bracelet that suffers with the same problem but I cannot recommend this to anybody else without warning them of this problem September 10, 2016
Rated 4 out of 5 by madaboutglam Understated elegance - everyday This is a beautiful necklace - so very elegant. I wear it with evening wear and it elevates it completely. Alternatively I wear it by day for smart work attire, and also casual on weekends, and it always draws compliments. Although this necklace is in semi-precious gem stones, it is almost like having a staple single row pearl necklace, such is its versatility. I have the grey agate which is very chameleon like - looks grey when worn with blues and greys, and looks a sort of taupe shade when worn with browns, blacks and beiges. I also have the gold sandstone colour, which is also a stunning piece. I would have given this item 5 stars if it had the original Chinese knot rather than the slider. I do like the look for the slider as it's more modern fixture, however, it doesn't function as well as the Chinese knot on other necklaces. May 27, 2016
Rated 5 out of 5 by Potpaint Lovely necklace I go through phases with LR but generally really like her stuff. This necklace is my favourite at the moment and very easy to wear. I like the length and the colours are very subtle (I got the rainbow fluorite). i would highly recommend this one! I suspect I will look out for another colour at some stage April 23, 2016
Rated 4 out of 5 by Voocom flawed I bought the Rainbow Flourite version which is lovely. Subtle colours ranging from a watery green through to lavender mauve with smaller gold coloured beads between them. I am not impressed with the slider fastening, which does not hold the cord tight, causing the necklace to drop lower than you want during wear. As I don't want to have to return it I've resorted to trying a knot to try to hold it tight. It's a shame this flaw lets down a quality product. August 19, 2015
Rated 4 out of 5 by Samantha70 What a shame Oh I'm so disappointed that I have to send this back. I purchased the grey agate version with little rose gold coloured beads, and it's divine. Smooth, beautiful stones and the size of them were perfect for me. However, the slider closure at the back is just far too loose. The necklace did not stay at the length I wanted and just kept opening to the fullest extent (due to the weight of the necklace and the looseness of the slider's internal workings). I'm so unhappy to send it back, as I really did love this piece. I like the idea of the slider fastening...very sleek and classy, but the chinese knot has much more stability and does not move. Maybe some work could go into tightening the slider? If it was tighter and more secure, this necklace would be perfect. August 18, 2015
Rated 5 out of 5 by hernextdoor Beautiful I bought the bracelet which was the today's special value in blue sandstone and loved it and was thrilled to find the necklace was still in stock so bought as an Easter egg for me. It is beautiful, love the slider instead of the knot, so easy to adjust. March 28, 2015
Rated 4 out of 5 by FunkyChicken Lovely I bought this to go with the white seashell Valerie bracelet and the purity of the white is stunning. Very tactile and smooth new metal opening. However the necklace doesn't stay at the length I want so hence 4 star's. March 16, 2015
2 3 Next