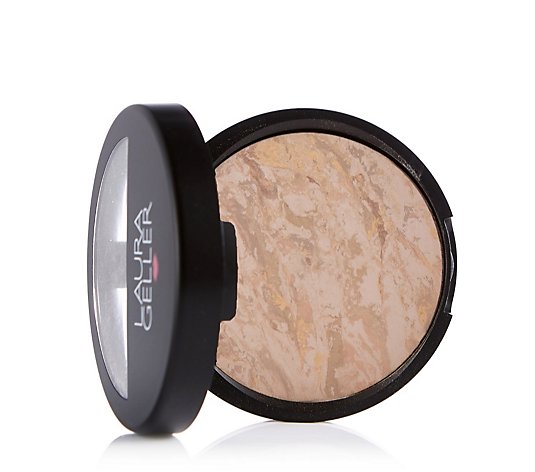 The Balance-n-Brighten Color Correcting Foundation from Laura Geller boasts swirls of colour-correcting multi-coloured liquids that have been baked to create a creamy powder, delivering weightless coverage that self-adjusts to leave skin looking even, flawless and beautifully radiant. Achieve natural-looking luminosity with this easy to apply, baked powder foundation that offers medium coverage, and a demi-matte finish you will love.

Artisan-baked formulas - whether you want to achieve a gorgeously perfected looking complexion, a rosy flush of colour to your cheeks or a golden, natural-looking tan, the baked formulations from Laura Geller will help you achieve it. Using liquid or cream formulas that are then baked on terracotta tiles for 24 hours, before being hand-finished by Italian artisans, each product glides on smoothly, with a soft, creamy application that can be layered for the intensity you prefer.

Choose your shade:
Contains:
How to use:

Rated 4 out of 5 by 37 reviewers.
Rated 5 out of 5 by JayneyS Best Foundation ever!!! Absolutely excellent, good cover as you can build it up to your desired look. Not cakey and does not look like you have a mask on so natural. I am converted. December 04, 2016
Rated 4 out of 5 by leah222 Good as a highlighter I ordered the medium one but had to return as did not give good coverage so was returned I thought it may have been because it was too light for my skin so then I decided to try the tan colour and it was the same did not cover was too dark BUT it works brilliantly as a bronzer so I have kept it and now use it as a bronzer! November 20, 2016
Rated 5 out of 5 by MrsB15 At last!! I have been on the hunt for a new foundation for sometime now to no avail as i'm paled skinned I either found that foundations were either too yellow/orange or far too pale that I looked ill I was also struggling to find something with good coverage I felt everything I tried either didn't cover no where near enough or it would cover to the point that it looked more like stage make up, I normally have never liked powders on there own i've always used liquid then a powder but i thought I would try BM as it's so popular here on qvc unfortunately it just reaffirmed my dislike of powders so I was rather sceptical when I ordered this balance and brighten but oh wow how wrong was I! Really wish I had taken the plunge sooner whilst I'm lucky that I don't have bad skin this just took it to another level my skin looks so much more healthier and glowy so much so I don't need my highlighter anymore and covers alot better than I ever anticipated, I will use my bb cream underneath for more coverage when i've got a big night out planned but any other time this alone with some concealer does the job which just makes life so much easier for me with two little ones to run round after thank you Laura! November 17, 2016
Rated 2 out of 5 by Kisskiss Not for me I've wanted to try this product for a long time so bought as part of a recent TSV. Was quite disappointed as the coverage for me was quite poor. I have thread veins on my cheeks. But the more I applied the more orange I became! I had ordered medium as that's my usual choice but maybe I should have gone a bit lighter. Because of this, I had to the the whole TSV which is a shame as it was on easy pay November 15, 2016
Rated 5 out of 5 by Bayleaf07 Brilliant ! I have tried several types of foundation and powders over the years and I was always felt I either had too much colour and product on or it was too powdery. My sister recommended this and I am so glad I tried it - it is so easy to apply, stays put for a good long time and gives such a lovely look that I have had several comments on how good my skin is lately. Am going to try other products in the LG range now. November 10, 2016
Rated 5 out of 5 by Shugga Would recommend 100%. Nice and easy to apply. Light natural finish, very colour adapting. Does not feel powdery at all. Best foundation in along time. Can't believe how long this has lasted me as it goes a long way. Have been suffering from acne as I have hit my 40s and was looking for a foundation that wasn't greasy. November 09, 2016
Rated 5 out of 5 by Yogibear Fabulous I've just ordered my second Balance & Brighten in shade Fair and I'm delighted with the ease of application and coverage. My skin has red areas and this covers perfectly, in fact, several people have commented on how lovely my make up is and I've noticed the natural finish I've achieved. Highly recommended! October 31, 2016
Rated 4 out of 5 by Tomjpearce93 Best powder foundation I love this product! It's smooth and creamy, doesn't feel cakey at all and you can really build the product - I wouldn't say it was FULL coverage but you can get a strong medium coverage from it. It wears all day and you have a nice radiance but without the oily-shine. The reason I'm giving this the full 5 stars is because I disagree with it being colour intuitive and colour adapting, I originally bought the medium and had to send back and get the light. But over all a great foundation. October 15, 2016
Previous 2 3 4 5 Next