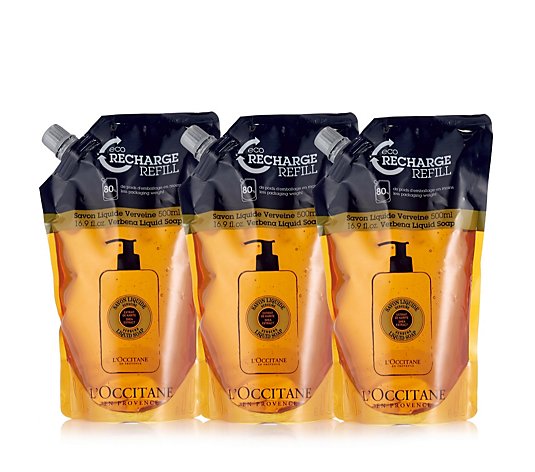 The Shea Hands & Body Liquid Soap from L'Occitane is enriched with shea and has been developed to gently cleanse, soothe and moisturise the hands and body, leaving the skin feeling soft and delicately fragranced. Indulge in the beautiful scent of L'Occitane's liquid soap and enjoy little moments of luxury every day.

Exception to the rule - L'Occitane has a Provence-only rule, but when it comes to special ingredients like shea butter, it makes an exception. The women of Burkina Faso have been using shea butter for centuries to pamper their hair and skin so L'Occitane have teamed up with them to create a fair trade supply chain that delivers supreme quality shea butter to your beauty routine.


Save on waste - fill up your existing bottles with these easy-to-use refill pouches or simply use them straight from the refill. You’ll receive 1.5L of product, so you’ll be stocked up on luxurious L'Occitane for a while!

Rated 3.9 out of 5 by 29 reviewers.
Rated 1 out of 5 by lizzylou2970 Ewww what have they done to the Verbena I usually buy the Verbena option in everything loccitane as l love the fresh citrus fragrance - but apart from one of the packets had split and left a really sticky mess - it has no lemon smell at all - which is strange as I brought the travel pack with the same sent and that is fine- I think the mass production of the refill soaps in this scent missed the quality test - Please Alexis sort this out as you will loose loyal customers if this is not rectified December 08, 2016
Rated 1 out of 5 by honeybugs What ever happened to the lovely verbena I ordred the verbena refills as qvc were offering such a good deal but when it arrived and i went to fill my l.occitane dispencer from my refill i realised that the colour was different and the scent nothing like the verbena envigorating scent that i remember . , I have been buying and using verbena for the last 18 years so i know the fragrance well . It also as other reviewers have suggested has this terrible almost sickly smell , so i reluctanly had no choice but to return it back to qvc . I,m very dissapointed as verbena is my favourate of all my bath products December 06, 2016
Rated 3 out of 5 by phildill70 What's gone wrong? I love verbena but just as other reviewers have said something has gone wrong with the smell or lack of verbena smell. I really like the refills but it was my husband who first noticed a problem. He used the pump bottle which I had refilled and said there was a really sickly smell from it. It's almost sour. Indeed the beautiful fragrance which the refills used to have has gone. So what has gone wrong. Please please have Alexis sort this one out. November 27, 2016
Rated 5 out of 5 by kmcew1 Love loccitane I have to say this is my only luxury in life, i don't spend my money on "normal" girly things as i am not into fashion and don't wear makeup but i have to say I love L'Occitaine products. These hand soaps are fab and don't dry the skin, loved by my hubby and me. October 16, 2016
Rated 1 out of 5 by tombola absolutely awful I do not write reviews very often but just had to, I have used this product before no problem but this order I do not know what has happened I cannot describe the smell its that bad,so will have to go back to bon mere tablets which I love so no hardship. August 11, 2016
Rated 5 out of 5 by cosmetica Hydrates your skin I have used this soap for well over 8 years and I love it. Use it in the shower and use it on my hands. Would not be without it. One of the reviewers said it dried their skin out, are you sure it was l'Occitane soap, for me it does the exact opposite!! June 30, 2016
Rated 5 out of 5 by bendoza Fantastic I bought the Verbena hand wash ages ago and also have bought the refills and they have lasted me so long . You just need one pump and it lathers up so much . I have one in my bathroom and kitchen and they just go on for ever. August 19, 2015
Rated 1 out of 5 by bids34 Not what I was expecting! I've used several different L'Occitane products before and had no issues with them at all but after using this for just one day after I had it delivered it totally dried out my hands and left me having to use handcream for the next few days trying to get my hands back to normal. Clearly something within this product did not like me. If you have any type of sensitive hands or parts of the body, I would say do not use this product. August 17, 2015
2 3 4 Next