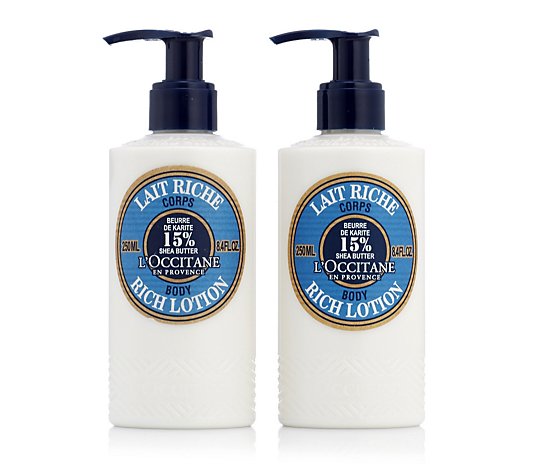 Containing 15% Shea Butter with natural honey and apricot oil, this rich, soothing lotion helps to moisturise and protect your skin, and is ideal for daily use. Introduce L'Occitane's Shea Body Lotion to your beauty regime and enjoy super soft skin in no time. Contains:

Like to re-order this product?
Choose out Auto Delivery option to receive an additional delivery of this product at today's price every 90 days for 18 months.

Rated 4 out of 5 by 42 reviewers.
Rated 3 out of 5 by Julychick Alternative packaging required This body lotion is lovely and can't fault it. However, it is so rich it won't come out the pump dispenser. After only using about a quarter of it , it stopped working. I have resorted to cutting open the bottle and decanting it into a plastic container! Presumably I will have the same problem with the second one too. I suggest the packaging is changed to a tub so that this doesn't happen. It's a pity because it is lovely stuff and I would like to buy it again but this puts me off. Thank goodness it wasn't bought as a present. October 01, 2013
Rated 4 out of 5 by Mamar Disappointing dispenser Love the Ultra Rich Lotion but I can't get to the bottom of the bottle as it won't pump the bottom portion of which there is a considerable amount. I gave a bottle of this to my daughter and she is having the same problem too. Not to be outdone I am going to cut the plastic bottle to make sure I don't waste any! Could it be that the new consistency is a little thicker and therefore more difficult to dispense? Other customers appear to be having the same problem too, so could Alexa pass on this problem to L'Occitane to sort out? September 24, 2013
Rated 3 out of 5 by pearlfisher Poor substitute Completely agree with the review of Snow25 below. Used this product for many years in the old formulation when it came in a bottle with a screw top and had to be squeezed out. It was so thick and luxurious the bottle had to be squeezed quite hard and I must say it flew across the bathroom a few times if my hands were not dry. Still, it was well worth it. The old product had a glorious smell and, for all its thickness, sank straight into the skin. This is a poor substitute indeed - why do all "new" formulations seem to disappoint? Yes, the product still has the same amount of shea butter and fragrance, but I think it is thinner, less absorbent, and sits on the surface of the skin for longer. As if that wasn't bad enough, the delivery of the moisturiser is shocking. I have only used about half of the bottle and the pump action has stopped working completely. Do L'Occitane really think this is an improvement? Well I'm afraid it's not. The bottle is now balanced upside down in the shower and every time I want to use the moisturiser I have to remove the pump altogether and press the bottle to get the product out. Poor show, L'Occitane. You can do better than this. Will not purchase again. And I've still got the other bottle to use (groan)! September 01, 2013
Rated 3 out of 5 by Snowflake25 Disappointed Totally agree with previous comment, new formula required. I also purchased this duo after previously using the tub of Ultra Rich cream, unfortunately found with both bottles that you could not get the bottom half of the bottles out with the pump action. Its a shame as I love the L'Occitane range. Such a shame but I would not purchase this particular item again. August 04, 2013
Rated 5 out of 5 by monarch47 delighted This is the first time I have tried the Ultra Rich Lotion and I couldn't be happier. When you put it on the scent of it lingers. Love it! July 27, 2013
Rated 5 out of 5 by flossiebluebell luxurious My absolute must have body lotion! It smells divine, a creamy easily absorbed body lotion that leaves the skin silky smooth. Definately a Desert Island product. July 16, 2013
Rated 5 out of 5 by biscuit42 amazing Simply the best body lotion on the market. Rich and extremely nourishing, makes skin feel hydrated and soft. Gorgeous fragrance and lasts ages. June 19, 2013
Rated 4 out of 5 by warwa100 New Formulation? I ordered this duo during Tuesday's show of the L'Occitane mini series last month. It was dispatched on the Wednesday and I received it a couple of days later - in time for the b/h weekend. Excellent service, thank-you. I last bought a L'Occitane body lotion in February, when the super size version of the old formulation was in stock. This has recently ran out, so I needed to replace it. I was a bit worried that this new formulation would be more like their body creams as previous presentations have suggested it's thicker, but I must admit I can't actually tell this is a different lotion to the one I have been using for years apart from maybe that it smells slightly less. I was out in the sun over b/h weekend but with the wind being as powerful, I didn't realise the sun was as strong as it was and didn't apply my Ultrasun before I went out, as I should have done! I did however use this lotion as after sun when I got home that evening and my skin is no longer red, sore or itchy. However, I only gave this combo four stars out of five because the more I use these lotions with the pump dispenser the more I wish they were in pots as I have never been able to use the entire bottle's contents - I just can't get all of it out. I end up binning the pump itself towards the end, but I still can't empty the bottle completely. June 02, 2013
Previous 2 3 4 5 6 Next