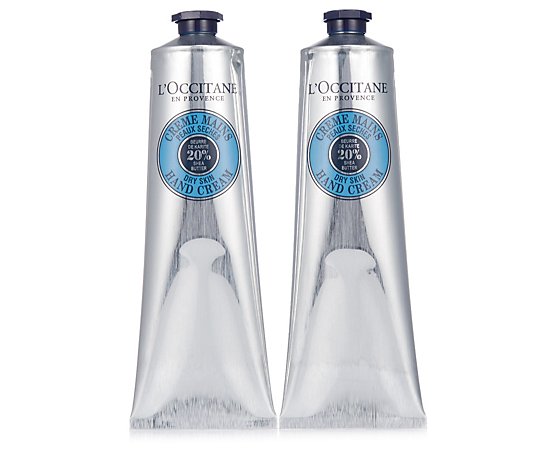 Features two tubes of gorgeous hand cream with a non-greasy formula that absorbs into the skin easily. Containing 20% shea butter, it has a lovely, rich and creamy consistency to help soften up dry hands.

"After a hard day at work, looking after your children or doing the groceries your hands need some TLC. So why not try L'Occitane's bestselling Shea Hand Cream? It's a worldwide favourite, renowned for its moisturising properties, and will leave hands beautifully cared for."


QVC presenter Catherine Huntley has chosen this product as one of her desert island beauty essentials - something she simply can't live without!

Likely to re-order this item?
Choose our Auto Delivery option and receive this collection once every 60 days for a 12 month period.

What is Auto Delivery?
If you're keen to stock up on this item, then you can sign up for our Auto Delivery plan, where you'll receive further drops of this item over a specified period, at today's price. Click on the Auto Delivery tab above to purchase this plan.

Rated 4.6 out of 5 by 256 reviewers.
Rated 3 out of 5 by Style50 Ugly metal packaging I do like the handcream. Maybe I used too much but I had to massage the excess into my feet so I could move around. HOWEVER.....the ugly metal tube is offensive. There's no way I would leave a tube of this cream lying around for anybody to see as it just detracts from it's contents and L'Occitane brand. It's all dents and kinks and looks like something a panel beater would have in his workshop....before he starts his smoothing work! May 09, 2013
Rated 2 out of 5 by ChristmasQuacker Disappointed When I first used this cream I was raving about it, well you would, because it's L'Occitane. It did feel ok at first, and I was genuinely pleased but I then started to notice that it was sitting on my skin, not sinking in. I know this because if I left it on five minutes or five hours, when I next washed my hands, it was still there. When I washed them, my hands felt slimey and you could feel it slipping around as I washed them, so it hadn't sank in. I have since used cheaper and has worked better, but obviously it's a personal preferance. April 28, 2013
Rated 5 out of 5 by Dydee Happy Hands! From the first use I was in love with this cream. My hands were showing my age (64) and since using this cream, age spots are practically all but gone. I use faithfully whenever I need it. It's not sticky and easily absorbed, lovely scent and men love it too. April 22, 2013
Rated 5 out of 5 by evertonforme Turned my hands from Mummy to Yummy I first bought this duo in desperation. As a mum with a young baby my hands seemed to be in water a lot and as a consequence my hands suffered. They were red, dry, cracked and looked like they had aged 10 years. I tried various other brands available on the high street, mainly they made little difference and one was so perfumed it burned and I had to wash it off. Loccitane is not like other hand creams. It felt cooling and moisturising as soon as it went on. I noticed a big improvement in the skin on my wrists in just one day, using it 3 times a day initially and my hands felt and looked so much better after two days. With the recent cold weather and central heating being on, my hands needed extra moisture. I went back to Loccitane and my hands feel lovely and smooth again. Its not the cheapest around but it certainly does the trick. I won't be without it now. April 22, 2013
Rated 5 out of 5 by Charmed81 Best ever hand cream!! My hands are very dry and I have tried all sorts of hand creams but I have fallen in love with this one. It is intensely moisturising but at the same time not sticky or greasy. I can put it on before driving and my hands do not slip at all. The smell and texture is beautifully divine!! I have given one to my sister and she is now addicted to it, just like me! Would not want to be without it! It is truly my favourite hand cream! April 14, 2013
Rated 5 out of 5 by Ninecatshere healthy nails and happy husband! just had to add a review - I've been using this cream for a while now (have some of the mini ones for my handbags so I'm never without it!) and I make a point of rubbing it into my cuticles when I apply - my nails have never been so long and strong as they are now! Also my husband gets dirty hands at work and has to wash them with de-greaser which leaves his hands really dry - he has really benefitted from using the cream too. April 11, 2013
Rated 5 out of 5 by 19craftygirl22 Miracle worker Last October i fractured my left wrist. I wore a plaster cast for 6 weeks. I thought i must tell your customers how "LOccitane Dry skin Hand Cream" brought my poor skin back to normal. April 11, 2013
Rated 5 out of 5 by Anushka A must for a healthcare professional... ...as the alcohol gel destroys your skin. This provides instant soothing relief and smells amazing. Stops a 30-yr-old's hands looking like an old leather handbag at the end of a night shift. March 24, 2013
Previous 3 4 5 6 7 ... 32 Next