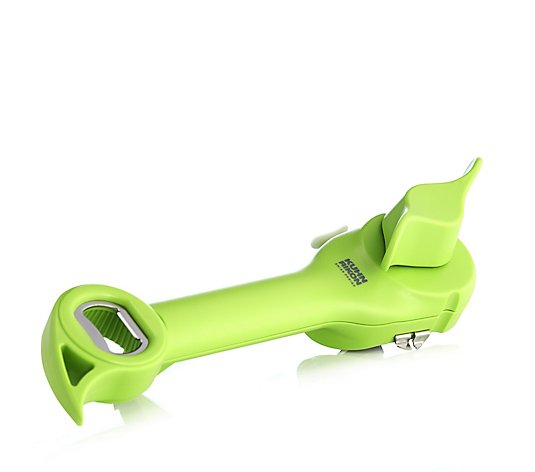 Kuhn Rikon's Ultimate 5-in-1 opener can be used to open cans, bottles, ring pull cans and plastic bottle caps, plus you can use it as a vacuum seal breaker to help you open firmly sealed new jars. Ideal for those with dexterity problems, this brilliant 5-in-1 opener is a real kitchen must-have. Easily open cans - the auto attach lid lifter feature keeps your fingers safe from sharp edges and use the mini pliers to lift the lid cleanly and easily away, even dropping it straight into the rubbish.


How to use:
All measurements are approximate

Rated 4.4 out of 5 by 43 reviewers.
Rated 5 out of 5 by morinsh ingenious! I had problems opening cans to begin with owing to the little notches or indents on the side of the opener being described in the instruction leaflet as "half circles" - but having got that worked out it was plain sailing. (I think the instructions could have clearer/larger diagrams.) This is a great little gadget which will greatly appeal to gadget addicts and most of all, the functions work! I tried out various designs of can openers over Xmas, intending to give them as gifts, but this is the best. I'm delighted. January 20, 2017
Rated 5 out of 5 by Sweeny Brilliant Great product just follow the instruction leaflet before using for the first time(no need to read again after that) have tried all the functions obviously tin opening is the main use but particularly like the screw top bottle opener. January 15, 2017
Rated 1 out of 5 by NannaHanna unhappy i've had mine now for 8 months but still haven't managed to open a single can. yes it does lots of other things successfully- but the demo on opening a can doesn't actually demo how to do it- it merely shows someone who knows how to use it..... using it. There's no close up , or detailed guidance, so i cant rate it highly, as i have no idea how it performs with opening cans- and it continues to sit in my drawer-unused. i would've sent it back but i missed the deadline. January 04, 2017
Rated 3 out of 5 by imafatmum NOT AS GOOD AS EXPECTED Opens tins and bottles fine but still cant get the little lever to open a jar to "pop" the seal. January 03, 2017
Rated 5 out of 5 by Florry2 Very easy to use This is by far the best can opener I have ever used. It is so easy to use I would say buy it for someone with weak or arthritic hands and they would be ok with this. December 16, 2016
Rated 5 out of 5 by SarahW kuhn rikon does it again Had this for a while now. Easy to use once you have got the 'knack' of opening a can. I am left handed but use right hand as well for things. Had no problems using this with either hand. If at first you don't succeed with opening can, don't give up, as you will probably find it has worked in the first place. It's just a matter of untraining yourself with the normal method of can opening. December 16, 2016
Rated 5 out of 5 by Kernow1west Brilliant!! So pleased I bought this - I tried it on a can after reading the instructions - I didn't last time & sent it back - this time worked brilliantly of course!! This will do so much I'm thrilled! Really delighted that it doesn't get clogged up with food, no sharp edges is fantastic, no more tiny holes in the tops of jars that I could open as this has a simple lift - excellent. The best & its use will ensure it pays for itself in no time!! September 30, 2016
Rated 5 out of 5 by ginger37 Super Kitchen essential I bought this primarily to see if the tin opener was as good as it looked. Well it is!! I love the fact that while this is easy to hold and use....it removes lids without leaving a sharp or ragged edge and without any of the tin's content getting on the opener blade or mechanism....Ingenious..... Just as a bonus - because it is not just a tin opener...I have been able to trim down the number of 'things' in my kitchen drawer. September 26, 2016
2 3 4 5 6 Next