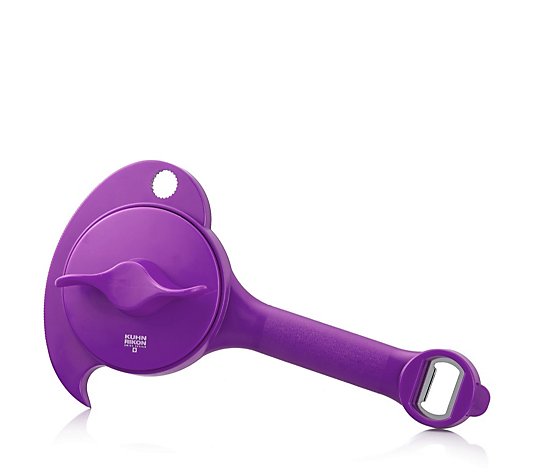 KR 5IN1 JAR/BOT OPEN Purple
All measurements are approximate

Rated 4.4 out of 5 by 12 reviewers.
Rated 3 out of 5 by Vivkins Not durable enough I suffer from arthritis and have difficulty with opening jars and bottles. This is so easy to use and I was very pleased. Used it only a few times since receiving it so was dismayed when opening a plastic bottle, a piece of metal flew across the kitchen. On examining the mechanism, I found one of the plastic grippers had broken rendering the device useless. It has not had much wear. In case mine was a rogue item, I went to order another but found it was on wait list. So can't really recommend the product as it has a short life. January 16, 2017
Rated 1 out of 5 by SueLiber Poor Quality & doesn't open anything Hugely disappointed with the poor quality of this product. It hasn't opened one thing. An elastic band around a jar or a screw top bottle of wine does a much better job. Elastic band opens them immediately whereas this product made no difference. Total waste of money September 16, 2016
Rated 5 out of 5 by Lovebling2 Invaluable This must be the best kitchen utensil I have ever purchased from anywhere. We suffer from arthritis so opening jars is a major problem for us but not any more this gadget definitely works. I would recommend this as a must have gadget for everyone, it has proved invaluable to us. I did not believe it could open medicine bottles but it does. We've tried it out on pickle jars, sauce bottles, juice bottles and child proof mediine bottles and it opens them all with ease. Another excellent Khun Rikon product. September 04, 2016
Rated 4 out of 5 by Stratobuddy Not big enough I bought this because I have great difficulty opening a large jar of gherkins. Unfortunately, this is not large enough to fit, and I don't have any problems with smaller jars. I would have returned it except for all the postage I would lose receiving and returning it January 22, 2016
Rated 5 out of 5 by Plastic1 Great gadget I have this opener and it's great wouldn't part with it, I also have dexterity problems, I had to ask my daughter or her partner to open things for me, usually had to wait till they came home, but not anymore it even opens jars such as meat paste, the can puller is great too as I used put a spoon handle in hole and pull can open that way. January 12, 2016
Rated 5 out of 5 by Snickerdoodle Wouldn't Be Without It I've had mine for about four years. It is fabulous and the cheery green colour brings a smile to my face. It's excellent for opening bottles, including nail polish. I have ME/Fibromyalgia/Carpal Tunnel and would recommend these to anyone with dexterity issues. Or singletons who don't have a strong person around to open bottles =^.^= January 12, 2016
Rated 5 out of 5 by Linnyvinny Excellent - sturdy and effective I am easily impressed with demos of kitchen gadgets on QVC and at various shows and exhibitions and so often buy exciting new items which rapidly get demoted to the charity shop bag in the boot of my car. This one is an exception to that rule. It was worth every penny. I was really struggling with opening small fizzy water bottles and this does the job with ease as well as opening larger jars , even ones that have got gunked up. It also assists with stubborn champagne corks! It is sturdy and easy to use. I have bought one each for my mother and my mother-in-law and ordered yet another one for our holiday home. October 16, 2015
Rated 5 out of 5 by andalis Such a handy gadget! Have used this umpteen times since it arrived - such a handy little gadget!! No need to rely on the hubby now for opening ridiculously tight vacuum packed jars!! Great bottle opener too! October 05, 2015
2 Next