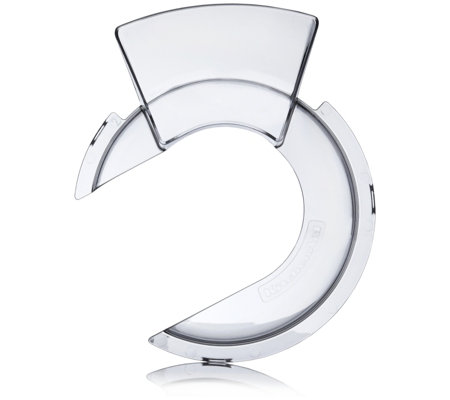 KitchenAid one-piece pouring shield. For use with the KitchenAid mixer to make it easier to add ingredients without splashing. This handy bit of kit is ideal for preventing needless mess when using your KitchenAid mixer.

Since the introduction of its legendary standing mixer in 1919, KitchenAid has built on the legacy of kitchen icons to create a complete line of products designed for cooks. Over 90 years later, the KitchenAid brand now offers virtually every essential for the well-equipped kitchen, with a collection that includes everything from countertop appliances to cookware. The perfect marriage of style and cutting-edge technology for your kitchen.
Print this page

Rated 3 out of 5 by 6 reviewers.
Rated 5 out of 5 by Gednkerry Fantastic I have this - it's brilliant if you don't want to make a mess when using your kitchen aid - I love it ! June 13, 2015
Rated 2 out of 5 by SMcnaughtie Problems with coverage Wish kitchen aid would reintroduce the 2 piece pouring shield which was sent with my stand lift model. It is far superior to the single piece shield as it gives complete circular coverage to the bowl. I did have a Kenwood major previously and that was a single piece shield which proved as useless as kitchen aids single shield due to the large gap left in the circle. I have just treated myself to the large kitchen aid mixer as found this size too small for fruit cakes and bread making and sadly that came with the useless single piece pouring shield. Rang kitchen aid to see if I could purchase a two piece shield but was told no longer manufactured A tip I learned watching Anna Olsen on foodnetwork uk is to place the ingredients on grease proof paper or parchment paper then pick up the edges and use it to funnel ingredients into the pouring section of the shield without any spillage. All that can be done wit single piece pouring shields is to throw a tea towel over the whole machine after adding ingredients but before switching on the power. Hope this helps. September 28, 2014
Rated 5 out of 5 by glamgranny1 I really love it. I have read other reviews but I honestly think this pouring shield works for me. It is light but it does work , easy to put on and take off. My friend has another make and it is vey cumbersome compared to this.I am happy with mine and recommend it .I use it almost every day in fact. April 12, 2014
Rated 1 out of 5 by foxy1 Not Very Good I did not buy this from QVC i bought it when i bought my Kitcheaid . Im sorry to say this cover is really not very good at all when you have it on the bowl the flour or iceing sugar just flys out of the bowl even with the cover on. it dose not clip onto the bowl and the gap is way to big . Haveing had the other big brand name of mixer's their cover was bang on . June 25, 2012
Rated 1 out of 5 by Cochen Ineffectual - a waste of money I bought this to go with the KitchenAid Classic mixer I bought on the recent QVC Home Day (for which I've also written a review). I found it a complete waste of time - the shield only covers about 2/3 of the mixing bowl, so you still get ingredients splashing if you add them too quickly. I found it much easier to simply turn down the beater speed as I added flour, water, etc (the ones that would tend to go everywhere), then once they had started to mix in, turn up the speed again. I am returning this item. January 31, 2012
Rated 4 out of 5 by Kirstie42 Good for Liquids I bought this previously from another source as QVC didn't stock it at the time and although it helps with splashing it does have a tendancy to jiggle about whilst the unit is working. I have added flour through the spout and had flour dust fly up from the gaps underneath going all over the kitchen but it does seem to stop water splashes. November 04, 2011
1-6 of 6 reviews