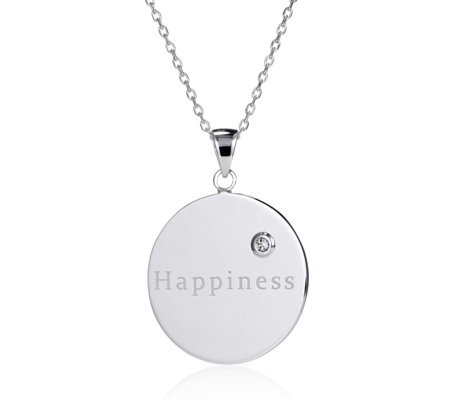 This necklace from K by Kelly Hoppen features a slim, circular pendant with the word 'Happiness' and has a brilliant-cut topaz stone placed at the top of the pendant, all housed on a fine polished chain. Refined and enduringly chic, this gorgeous K by Kelly Hoppen piece will look lovely worn alone or paired with your favourite chains.
All measurements are approximate

About K by Kelly Hoppen

Created especially for QVC, the renowned designer's home and jewellery ranges offer luxury for your everyday. Find shimmering sterling silver and gold-plated pieces designed for layering, as well as gorgeous decorative accessories and luxurious bedding, all with the Kelly Hoppen touch.
Print this page

Rated 3.5 out of 5 by 2 reviewers.
Rated 5 out of 5 by 101Spaniels MIRROR-LIKE REFLECTION - GORGEOUS!! I cannot agree at all with the above review - this piece is simply beautiful. Give it a chance however! Try putting it on and stand in front of a mirror in the sunlight, or in strong artificial light and you will see exactly my point - the reflection from the highly polished disc is utterly magnificent - the shine and reflection is quite, quite dazzling and I was mesmerised. There are many, many pieces of jewellery across the board that only come to life in the sunshine. Personally, I don't wear much jewellery over the cold and cloudy winter months, preferring to leave my diamonique and pieces such as Kelly's, until the sunnier weather. I also have Kelly's 'Hero' necklace in the silver and the 'Happiness' disc hanging in the so unusual way demonstrated on the video, (and which I would never have thought of doing) is bang on trend and so, so DIFFERENT, which is always a good thing. I would perhaps have preferred a more edgy, thought-provoking word, rather than the more obvious 'Happiness', which it has to be said, has been done to death!! But the piece itself more than makes up for this. As an aside however, I was very annoyed that my disc had a couple of faint scratches on the face, making me wonder if someone else had returned it? I swithered with sending it back but decided it wasn't worth the hassle and hopefully no-one will notice. However, I do think QVC could have noticed this first and not sent it out! All in all though, very pleased. I do think however that to get the full effect, it does have to be hung from the Hero necklace, rather than an ordinary chain. This however is obviously only my opinion and others may well be happy enough with its simple and clean look. January 21, 2017
Rated 2 out of 5 by claire84681 Underwhelming I am a big fan of Kelly Hoppen's and have several of her bedding sets which I think are beautiful and well worth the money but this I felt was very average quality for the price point so I have sent it back this morning, had it been half the price I may have kept it but for this amount I could buy a piece of diamonique which I feel represents far better value for money. I would imagine this would tarnish very quickly and it had that horrible metal smell when you touched it like you had just picked up some copper change, not really impressed and am sure not the quality that Kelly would want to put her name to.. October 10, 2016
1-2 of 2 reviews