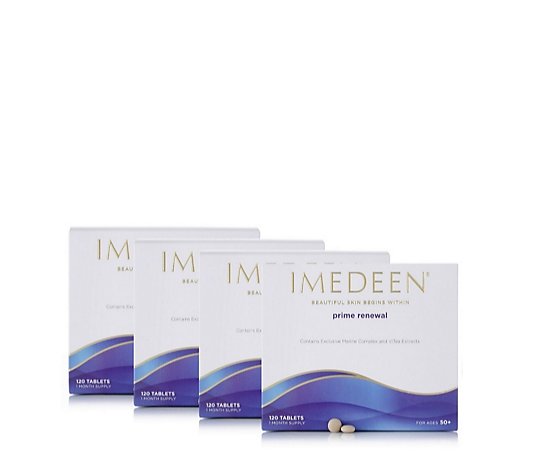 The Imedeen Prime Renewal Skin Collection features four months worth of Prime Renewal supplements that contain a range of vitamins and minerals especially designed for women over the age of 50. Award-winning beauty in a tablet, this set is perfectly suited to those with hectic lifestyles who want to support their daily routine.
Stay stocked up - choose our Auto Delivery option to receive two more deliveries of these supplements every 120 days at today’s fantastic price.

Packed full of ingredients that help protect your skin from damage caused by environmental factors, Imedeen skincare tablets are a fantastic supplement for your beauty routine, working to reduce the signs of ageing by enriching your skin from within.

Rated 3.8 out of 5 by 58 reviewers.
Rated 1 out of 5 by kayfdee Expensive mistake Was determined to use for 5months as one reviewer recommended, had to give up after 4. Developed dry hard skin around toe and finger nails, dry hard cracked skin on my heels ( not a problem I'd had for years after I stopped using products with SLS in), but worst of all is the state of my finger nails which have been flaking and breaking for 2 months. There is no difference at all in my skin, either on my face or body. Whatever 'marine complex' is, it doesn't suit me, and I wish I had been sensible enough to avoid ingesting something when I don't know what's in it. Expensive mistake. July 09, 2015
Rated 5 out of 5 by gillyflower2 made a real difference I have used Imedeen for 3 months now and have noticed a real improvement in my skin and hair.Skin is plumper and wrinkles less noticeable.My hair is fuller too. These improvements have taken time but have been well worth the wait. I would say it is worth the investment. I have just reordered. June 23, 2015
Rated 1 out of 5 by pussycatsmum disappointed had good expectations for this and took the whole 120 days but noticed no benefit at all. returned for a refund. June 17, 2015
Rated 1 out of 5 by fab57 no result I have just trailed imedeen for 14 weeks and nothing has happened. Disappointed because I have used another brand and had a good result. Perhaps if taken for a longer stretch of time but I do not want to spend more money to find out , so hence I have asked for a refund and no stars for no result. June 12, 2015
Rated 1 out of 5 by Bonnieballoo Expensive mistake aged 53 my skin is thinning, dry and lost radiance. I thought this would be the answer to my prayers. It turned out to be a very expensive mistake. From before and after photos at the end of 4 months there was zero difference. Skin was still dry, sagging and dull. Pinch test was the same. The only noticeable difference was to my bank account. Unfortunately I did not realise there was an extended trial period on it or it would have gone back If you do try the 120 day supply don't make the same mistake as I did June 09, 2015
Rated 5 out of 5 by 007piglet007 Do you want younger skin? These little tablets really work! I met the lovely Emma for a skin scan, and had another one done 4 months later. My collagen had increased by 25%. I'd made no other changes to my diet, so I can only put it down to Imedeen. My skin is more glowing, elastic, less dry and firmer. Even doing the pinch test on the back of my hand, my skin now bounces back. Also, no scaly shins over winter! These don't work over night, but, it's worth waiting for the results! If you can get a scan done, it's really good to see the 'evidence'. I'm proud of getting older, but, it's nice to know that my skin is staying young! May 29, 2015
Rated 3 out of 5 by Samba555 Strange side effect! I was sold on this as, being nearly 60, with reasonably good skin, I was anxious to maintain it by trying Imedeen. After about a month however, my skin was a little better but my hair was a mess! I have fine, dense hair but it had started to look thin, too silky; impossible to lift, with no bounce, no matter what product I used... a sudden and dramatic change. I was at my wits' end until I realised the only change I had made to my beauty regime was adding in the Imedeen x 4 tabs daily. I immediately stopped taking them and after about a fortnight, my hair started to return to normal. Now, having spent a lot of money on this product,I am very disappointed. I would though say that if you have thick, curly or coarse hair - Imedeen is well worth a try! I will cut the dose in half, as I hate waste, and hope that my newly acquired PKingsley products will offset any hair changes! May 10, 2015
Rated 1 out of 5 by Cloudy5 No visible results Took these pills religiously for the 120 days trial (minus about a week as I sent them back for refund). No visible difference on me. Thank goodness for extended refund period as its a lot of money to waste. Cannot recommend it. April 30, 2015
Previous 2 3 4 5 6 ... 8 Next