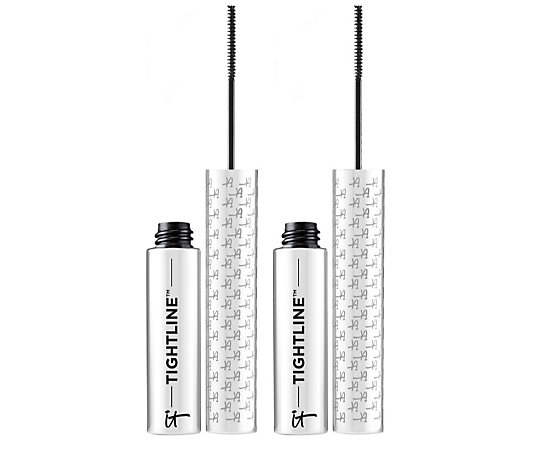 The IT Cosmetics Tightline Mascara is designed to be your mascara, primer and eyeliner in one, with an innovative skinny brush designed to place black pigment along your entire lash line, helping to fill in the look of sparse spots to create instant definition and volume. Create a sleek liner look with gorgeous lashes in one with the help of this advanced 3-in-1 mascara by IT Cosmetics.

Rated 3 out of 5 by 64 reviewers.
Rated 1 out of 5 by joonieb So Disappointed Absolutely useless mascara, I have old mascara's that perform better than this! I thought that maybe there was something wrong with the first one I used so i opened the other one and that was just the same. Back to my old cheap mascara for me. February 01, 2017
Rated 1 out of 5 by MoaD Big Let Down I tried using this "mascara / primer" as a primer with Benefit Rollerlash on top - my lashed looked spidery which is not a problem I have ever had using Rollerlash on it's own. I also tried using this as a mascara on its own which did give a nice understated effect, but I spent the whole day having to clean up black flecks from my eye waterline and under my eyes. Then there is the issue of size - by way of a comparison -in a Mally mascara you can expect 10ml of product, in Bare Minerals 11ml of product. With IT Tight Line you only receive 3.5 ml of product per mascara!!! Even as duo this was never going to be good value. This was sent back. January 31, 2017
Rated 5 out of 5 by nocturnalbird Extremely Pleased I really like this product, for the first time in years, I have a mascara that works, stays on and most of all..... DOESN'T IRRITATE MY EYES... I have had severe dry eye syndrome for quite a few years now, hence I can't get a mascara that doesn't make my eyes itch AND makes my lashes look good... UNTIL NOW! I love the super slim brush, no clumps, no HUGE brush, just a Slim, easy to use rod. AMAZING how it works, delivers the mascara beautifully..and no irritation... For the first time in many many years I can now wear mascara again, and feel good again, which is wonderful!!!! ... so THANKYOU 'IT' Thanks QVC for bringing IT to us. January 29, 2017
Rated 5 out of 5 by Emma31 Great for lengthening I love this mascara as the wand is great for catching individual lashes and creating length. The mascara doesn't clump either so gives a more natural and even finish. Will definitely purchase again. January 27, 2017
Rated 5 out of 5 by Bargainshopper Best Ever!! Having used mascara for over fifty years, and bought many different brands, I have to say this is by far the best...I just love the wand, and makes application so easy and no " clumps" like with most mascaras... Will now stick with this brand, especially the thin wand.... January 25, 2017
Rated 1 out of 5 by Loulou6 Bad buy I have never written a poor review even although I have returned products before. I would have returned but threw the packaging away. The brush is so fine I almost poked my eye out.It does not have the effect like the magnified effect it had on yor tv screen. This is only the second review I have written in years be cause I feel so strongly this product is a complete waste of money. January 21, 2017
Rated 5 out of 5 by kt1524 Great mascara The super slim wand gets all lashes, even the fine and corner ones. First time I've found a mascara that covers all my lashes and stays put. A definite repeat purchase. December 26, 2016
Rated 5 out of 5 by Jeebs Very good indeed. What a good concept, a brush which really is fine and easy to use. I did find that it gave me a natural look,although it is meant to be a primer, without the need for another coat of mascara. Topped with mascara though finishes the effect. I chop and change my brand of mascara but this is something I will repeat purchase. Thank you. December 22, 2016
2 3 4 5 ... 8 Next