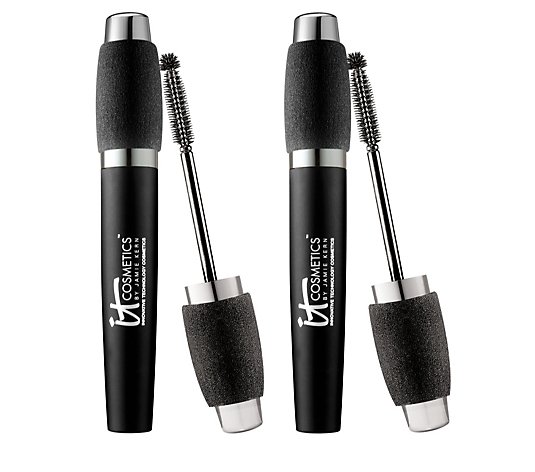 Custom brush - lengthens, curls and separates lashes while the innovative Lash Ball Detailer tip is designed to push up every last inner and outer corner lash

Rated 2.8 out of 5 by 85 reviewers.
Rated 1 out of 5 by ling dissapointed I saw this presentation and it sound so good, so i give it a try . I started using just last week and find the mascara doesn't do what it claimed. Dissapointing , have used many other mascaras and by all mean this is the worst one It begins to clump very quick and lashes feels heavy ?? Hence no lifting whatsoever and the lengthening is total rubbish Never buy IT cosmetic again January 19, 2017
Rated 5 out of 5 by TheTheatreFox One of my fave mascaras I loved this mascara for a number of reasons: 1) I'm increasingly long sighted so the brush shape with the ball on the end made it so much easier for me to apply to all parts of my lashes. Definitely the best ever mascara brush 2) The mascara itself didn't clump or look over done, I had great thickened evenly coated lashes. If you want heavily coated lashes that look like you have spider eyes then this mascara isn't for you. Quite simply I loved it and will be buying again. January 09, 2017
Rated 1 out of 5 by mamafee IT was not the mascara for me Made my eyes itch like mad so had to send them back. December 23, 2016
Rated 2 out of 5 by Redpepper1 Disappointed Unfortunately had to send this back as I ended up with panda eyes by the end of the day and having blonde eyelashes I thought the idea of a tint with the mascara might be useful. Didn't work. So disappointed. Obviously was ok for others. Have sensitive eyes so the first time I took the mascara off, my eyes stung but that seemed to lessen over the weeks. Used the same remover that I've used for the past year so it wasn't that. Love their foundation tho! December 15, 2016
Rated 2 out of 5 by decaff Doesn't suit Sorry I returned this today. Like other reviews this mascara gives you great lashes but after a short time my eyes got very itchy . December 15, 2016
Rated 5 out of 5 by beautybuyer47 FANASTIC I usually use the Roller Lash by Benefit which is really good and lengthens my lashes, however saw this and your get two so thought i would give a try. OMG this mascara is brilliant, it lengthens my lashes, easy to put on, brush is fab, this is definitely worth buying/trying. I love my eyelashes to look long and this just does that. Lasts all day, no smudging. Brilliant will be buying again. One of the best!!! December 06, 2016
Rated 3 out of 5 by NJG25 my hunt for the perfect mascara continues After having read many of the mixed reviews about this product I didn't really know what to expect. My mum actually bought the duo and gave me one of them (what a gem she is). I would like to start of by saying that I give this mascara credit it is a very true black a nice consistency. I am not used to the ball shaped end and kept poking myself in the eye with it but I'm sure that's something you get used to after time and practice. I do have to say that I am impressed with the suction on this mascara as you pull out of the tube it doesn't leave too much product on the brush which I feel does make application easier and not so messy. However them points being said I don't find that it does what it claims I feel like it gave my lashes a half decent amount of length but as for volume and curl ?? I feel like I have tried other high street brands at a fraction of the price and have got the same results. I just feel like a mascara either does one or the other it either lengthens lashes or add volume. As my mum gave me one I will be keeping it however if I would have paid sadly these would have been going straight back. Sorry qvc but my hunt for the perfect mascara is still ongoing. November 25, 2016
Rated 2 out of 5 by Bobo1962 Irritated eyes Only tried once after not wearing for very long my eyelashes started to itch, mascara flaked off so quickly removed.Have to return sadly, I have never had any irritation from a mascara before! November 24, 2016
2 3 4 5 ... 11 Next