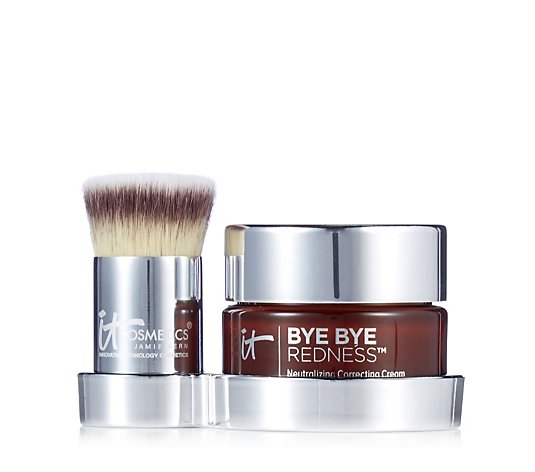 Bye Bye Redness Correcting Cream is a red-neutralising and correcting cream that helps to cancel out uneven tones in your skin. If you suffer from any red-toned skin discolorations such as rosacea, broken capillaries, blemished or irritated skin, try this product from It Cosmetics, either alone or under make-up.
Contains:
How to use:

Rated 4 out of 5 by 63 reviewers.
Rated 5 out of 5 by Fitaggart Little pot of magic! I was a little sceptical about the product but am always keen to neutralise the redness in my skin. I have typically Scottish skin, light with freckles but not porcelain so all a bit inbetween-y! I was concerned that the colour of this product might be too much for me, but it's just great. I took on board the advice from the other reviews and also the presentation and used a tiny amount. It provides great coverage, neutralises the redness and quite literally is the best product I have used for my complexion. Bye Bye Redness - does exactly what is says on the tin...or tiny pot! August 08, 2016
Rated 4 out of 5 by gracieloo91 it's a concealer not a foundation I originally ordered this for my mum because she has bad redness on her cheeks but I couldn't resist trying it. I found it gave good coverage but you can't use it like a foundation like they say. you will look orange if you have fair skin using it like a foundation. so I tried it as a concealer and used my benefit foundation on top and it looked great. much more natural. I think they should do this in different skin tones. August 07, 2016
Rated 5 out of 5 by tallons Fantastic product At last I've found a product that really does cover redness,I have tried and tested so many cosmetics that claim to cover redness but they don't not really,but this one does exactly that I put on a little at a time and build it up to full coverage and believe me I've got a lot to cover and I finish with a little powder and that's it for the day,it stays put until I take it off, now I've found this fantastic product QVC can you please keep this in stock as I don't want to be without it. August 06, 2016
Rated 5 out of 5 by Snowpea Great!! I really wasn't expecting very much from this item. I had read the previous reviews and was expecting it to be too orange for my pale skin.....Oh how I was surprised! It is a lovely cool beige which suits my cool ivory skin tone. I can't believe how awesome this is. Its light and super easy to apply, you don't need much, start off with a small amount and add more if needed. It covers my redness and broken veins perfectly. It feels amazing on the skin, light and none greasy, you can barely tell its there! I would recommend anyone to give this a go. August 05, 2016
Rated 4 out of 5 by Debw Good coverage and blends excellent I've tried lots of cover ups and this is the best so far even covers yellow lumps on skin and blends them where as others make them stand out more have ordered another one only gave 4 stars cause jar is fiddly and managed to spill some so would given 5 if came in a tube or other than jar July 31, 2016
Rated 5 out of 5 by victorianne best cover i have used have tried a few of products to cover my red nose and cheeks and this is the best . I will now go out without make-up on in the summer for the first time in years. I too thought it was a very small pot but I use such a small amount it will last a long time as I don't have to keep applying it during the day. It stays put. July 26, 2016
Rated 3 out of 5 by cherylr Mixed Review I opened this product for the first time this morning after it arrived a few days ago. I don't know if it was the heat of last week or just the packaging but mine arrived with most of the pot on the outside of the jar. The product works well to cover redness tho I, like the other reviewer, am left looking rather orange. Unfortunately I will have to return. July 23, 2016
Rated 5 out of 5 by Rosiefizz Fantastic coverage The best redness concealer I have ever used, will definitely buy again. My only slight disappointment was that the lid wasn't tightly closed so some product had leaked out of the pot during delivery. July 23, 2016
Previous 3 4 5 6 7 8 Next