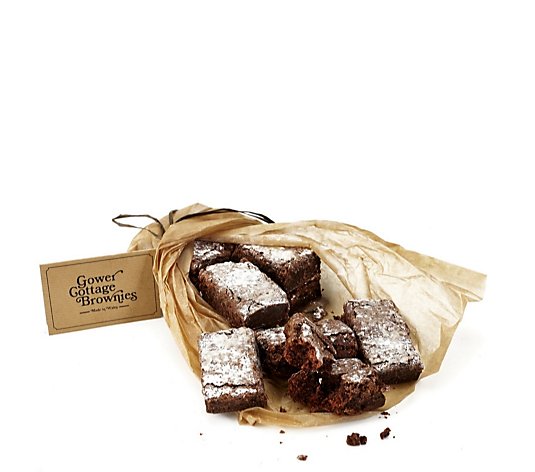 Rated 4.3 out of 5 by 194 reviewers.
Rated 5 out of 5 by Daisy46 Simply Amazing! Firstly I haven't got a sweet tooth. My Husband does and after watching Andy raving about these brownies I thought I would give them a go! They are like nothing I have tasted before. Not too sweet, not too heavy just glorious. I will be ordering these beautiful brownies again! December 13, 2016
Rated 2 out of 5 by shazone Still don't like chocolate brownies! I ordered these as I don't like chocolate brownies like the presenter, who said that after tasting these they changed his mind.Sorry to say that they didn't change mine and I still don't like chocolate brownies! I chose the original and they tasted much the same as others that I have tried. Disappointed! December 09, 2016
Rated 1 out of 5 by Hamish1966 Poor product Was so looking forward to receiving these brownies as they looked great on the presentation,but very disappointed. They are not good value for money as they look so much bigger in the presentation. The ones I received were very small and a few of them were broken. Won't be ordering again, once again qvc seems to show things on tv that look bigger and better than in real life December 08, 2016
Rated 1 out of 5 by CricketMad1 mint option Tried the mint brownies. The brownie itself was ok but the mint was much too strong. It was just like going into the garden and picking fresh mint and putting it on the top. They were also a lot smaller than you see on tv. December 07, 2016
Rated 3 out of 5 by Janerose Delicious But Tiny Received these brownies today. Really delicious but very disappointed with size of portions won't be buying again just too expensive. December 07, 2016
Rated 5 out of 5 by Kags666 Super Yummy I'm now on my 3rd delivery of the Gluten Free option, these brownies are superb, very moreish and tasty, would highly recommend. Putting the latest delivery in the freezer for Christmas and hope I can resist until then! Thank You Kate, keep up the good work and Thank You QVC, Andy and Dale for all of the festive food fun. :-) December 05, 2016
Rated 1 out of 5 by Darlobloke Not as advertised on show The brownies received are less than half the size of the ones shown on the show. Not good value for money so will be returning for a refund. Very disappointed. December 03, 2016
Rated 3 out of 5 by Subiliminal small and where are the walnuts? They are delicious but smaller than expected. I also expect more than 3% walnuts in the walnut variety. To me that is not matching the premium price. November 29, 2016
Previous2 3 4 5 ... 25 Next