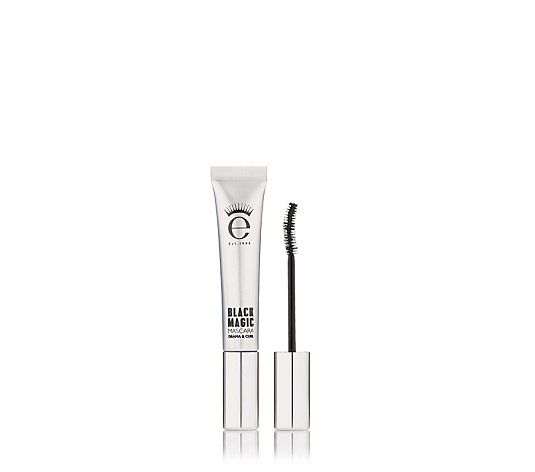 Features a water-resistant, long-lasting formula in an intense carbon-black shade. Enhance your eyes to dramatic effect with this striking mascara.

Rated 3.8 out of 5 by 84 reviewers.
Rated 1 out of 5 by CaliforniaDreamer Expectations Not Met Tube of black blub. Instant return. Shame, I was really looking forward to trying this highly credited brand. August 19, 2016
Rated 3 out of 5 by JessieN Average Not a bad mascara, but very natural and does not add much drama. After applying 2 coats, my lashes did not look particularly volumised or dramatic. I can appreciate that a soft, natural look is flattering, but I prefer a fuller lash look so people will really notice my lashes. February 14, 2016
Rated 3 out of 5 by chezzausauk I love Eyeco but this product, not so much... I've been using Eyeco skinny black mascara for quite some time now however, I was so disappointed with this product. Application was OK, nothing special but the end result for me was panda eyes. Also the tube seemed to contain dried up mascara after about 1 to 2 weeks of use. I found I had a skinny brush that I had cleaned for later use with alternative mascaras so I decided to get rid of the brush that came with it and use the skinny brush for this. Actually, using the skinny brush made quite a difference. Not only was the mascara not dried out but the skinny brush made application SO MUCH easier. I won't repurchase this product but will continue to use the skinny product as it works perfectly and there are no panda eyes after a few hours. December 19, 2015
Rated 5 out of 5 by BorderReiver No more Panda eyes This is only the 2nd Mascara I have ever found that does not give me Panda Eyes. I even get Panda Eyes with Mally by the end of the day! Eyeko Magic makes my lashes fuller with no flakes and cleans off easily with Gatineau Floricil. I have tried it with and without primer on my lashes and no problems either way. Can you do a plum coloured version please? August 02, 2015
Rated 3 out of 5 by PenelopePloom Not for me unfortunately I had high hopes for this mascara but it's not for me. Found it to be very clumpy despite cleaning the brush of excess mascara. Most annoying is that I've on a few occasions ended up with mascara just below my eyebrows during the day. I know it's not waterproof but would expect more staying power. July 22, 2015
Rated 5 out of 5 by m80al Eyego nowhere else Hands down the best mascara ever!!!! Beautiful pigment and definition and it does not flake or smudge. Won't buy anything else now! June 21, 2015
Rated 5 out of 5 by netpet26 No flaking Love this product, no flaking or smudging, arrive home at end of day with mascara still perfect. Am loving the curved brush, looked a bit off putting but it really is easier to use. Got everything just right with this one, thanks June 01, 2015
Rated 2 out of 5 by teddy271 Doesn't work for me Too wet, too clumpy and leaves marks on your eyelids. May be okay if you are a teen or early twenties or want to look like Bambi. For me, it just looks false and OTT May 16, 2015
2 3 4 5 ... 11 Next