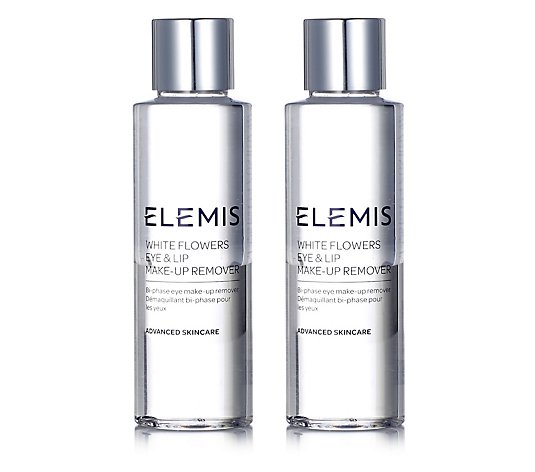 Launched over 25 years ago, Elemis is the leading luxury British spa and skincare brand, favoured by millions of spa-goers every year. With a vision to bring together science, nature and aromatics, Elemis' treatment-led everyday skincare and body therapies have become award-winning favourites; available internationally in over 92 countries and over 1,600 spas.
Print this page

Rated 4.2 out of 5 by 40 reviewers.
Rated 5 out of 5 by shillitoe fantastic I have been using this for 5 nights to take my eye makeup off, this is the only one I have truly been pleased with it does the job really well, and I have notice the skin around my eyes has improved, thanks very much. ps' don't forget to shake before use! April 04, 2015
Rated 5 out of 5 by warwa100 Staple Beauty Product... I ordered this duo on Sunday, it was dispatched on Monday and I received them on Tuesday! I was first introduced to this product last summer by my Mum. I used Gatineau's Floracil previously, but this product is in a league of it's own! I have tried it out on a variety of brand's mascaras, eyeliners and eyeshadows, such as Laura Geller, Mally, bareMinerals, Liz Earle, Doll10 and ybf. March 12, 2015
Rated 5 out of 5 by cfc4ever Must have Been using this eye make up remover for a while now . Tried it when the make up remover I was using started to dry my lashes out and I was losing some every time I used it. My mam gave me a bottle of this to try and I was hooked it takes all your make up off and conditions your lashes , no more breaking lashes for me, thanks Elemis January 01, 2015
Rated 5 out of 5 by MandyE Simply the best I have tried others but this remover does not make my eyes red or sore. September 07, 2014
Rated 1 out of 5 by anastasiasmom Made my eyes water Thought I would try this as I have sensitive eyes but this left a greasy film and made my eyes water. They were still watering the following day. Also you need to wipe a few times to remove makeup & some mascara was still left. I would say don't bother, there are other products on the market that work better & are far cheaper. August 31, 2014
Rated 5 out of 5 by FlorenceAngel Wowser I have a degenerative eye condition and i am not supposed to eye rub at all i have worn make up every day since i was around 15 i have always used a certain cream which i still love but i of course have to rub to get the make up off.Tried this and wow its simply fantastic,put an amount of the shaken/mixed remover on a cotton pad,put on eye/s for a few seconds then wipe away,2 wipes is all it takes for me and it leaves my skin so soft.I love this product its one of my fav things ever. August 21, 2014
Rated 5 out of 5 by 2ufromme Don't Forget Shake This item is great at removing the most stubborn of eye make-up - just remember to shake the bottle to combine the ingredients before application or you just get oil - maybe the problem others have had. No sting, no puffiness, just conditioned eyelashes. Elemis your the best. August 11, 2014
Rated 5 out of 5 by nascar FLOWERPOWER ive been waiting for 4months to review this product at least. to make sure it is this product which is looking after my eyelashes as well as taking my eye make up of with no effort. my eye lashes they have never been in such good condition .they also look thicker this product is so under rated at 5 August 05, 2014
Previous2 3 4 5 Next