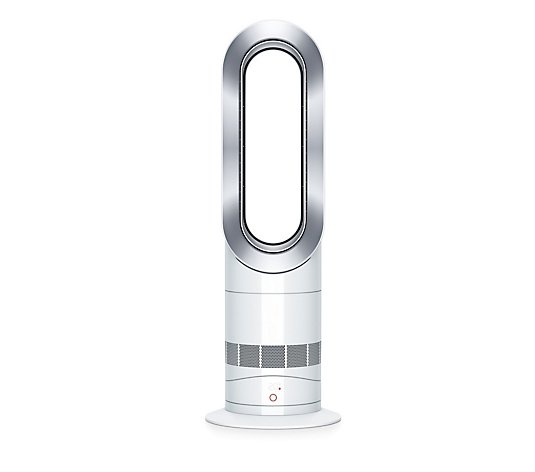 With an ability to heat or cool its surroundings to the precise degree, the innovative Dyson AM09 Hot & Cool Fan Heater features a sleek design, a long-range jet focus control, an energy-saving sleep timer, plus it's been specifically engineered to sit quietly in the background. Forget about visible heating elements or fast-spinning blades being an eyesore and potential hazard, tailor the temperature in your home for maximum comfort with this intelligent device.

Quietly cool - this innovative model maintains a temperature below dust burning point, so you can say goodbye to worrying burning smells.

Air Multiplier technology - air is drawn in at the base of the machine and amplified to create long-range heat projection for warmth and high-velocity air to cool you down. The intelligent thermostat maintains your target temperature, with 10 speed options in both heating and cooling modes, working quickly and evenly to make you comfortable.

A peaceful slumber - the built-in sleep timer means you can set the fan to go off after you have gone to sleep, saving energy and providing peace of mind.

Precise control - the Jet focus control means that not only can you set your preferred temperature to the exact degree, you can select Focussed Mode for concentrated and direct airflow, or Diffused Mode for a wider area, ideal for warming or cooling larger spaces.

Handy remote control - the AM09 comes with a remote control that can be used to turn the machine on and off and to adjust oscillation, temperature and airflow power. It’s curved and magnetized so it stores neatly on top of the machine too.

Sturdy with touch-tilt control - the fan heater pivots on its own centre of gravity, staying put without clamping and automatically switching off if it tips over. It tilts 10 degrees from upright in both directions, so you can direct airflow exactly where you want it around the room.

Dyson's two year guarantee - Dyson offer a full two year guarantee for parts, labour and transport. If there's a problem with your Dyson machine, they'll come to you. A Dyson Field Service Engineer will arrange to visit your home or workplace so they can fix your machine when it's convenient.

Simply register your guarantee with Dyson in one of three easy ways:

What’s in the box?

Founded by James Dyson in 1992, this pioneering Britishcompany produces everything from bagless vacuums that don't lose suction toinnovative bladeless fans.