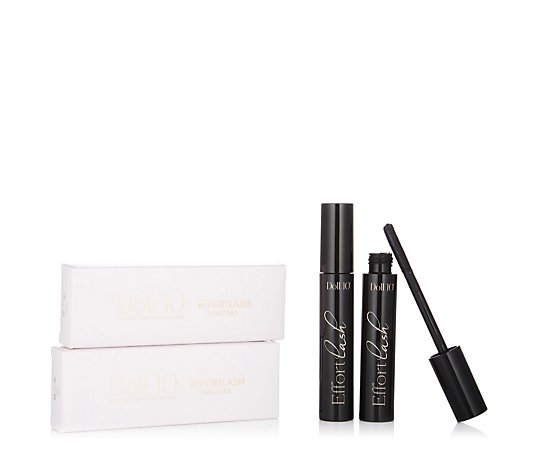 The Effortlash Multi-Dimensional Mascara from Doll 10 combines a unique gel formula and an innovative brush to help deliver lashes that appear thicker, longer, and more voluminous, while being beautifully separated and clump-free. Full, flirtatious lashes are finally yours with this fabulous Doll 10 mascara.

Six appeal - lengthening, volumising, conditioning, curling, styling and separating your lashes - just two coats will completely transform your look and this formula will also hold a curl, style and separate your lashes without ever clumping or flaking.

Created by Dr Doris Dalton, Doll 10 creates make-up designed to benefit your skin by fighting the signs of ageing and using moisturising ingredients; applying science and innovation to develop a range of cosmetics to create timeless, redefined beauty.

Rated 4.3 out of 5 by 21 reviewers.
Rated 4 out of 5 by Ouney Really nice mascara My favourite is Mally but this comes a close second. Can clog a little bit so care is needed but you don't need much and makes your lashes look lovely. Shame about the high cost of p&p especially as it took over a week to arrive via Royal Mail :( November 13, 2016
Rated 5 out of 5 by Kc1970 Fab Love this mascara!! I have long lashes but very fine so they tend to look like spiders legs. This mascara thickens lengthens & separates my lashes so I look like I have loads of lashes use two coats daytime & for evenings add a coat of Tarte lights cameras mascara for a more glam look. October 18, 2016
Rated 3 out of 5 by chew gloopy I admit I'm a Benefit 'They're Real' fan but thought I'd try this as the brush looks similar. But it's very 'wet' and took too long to dry. I couldn't get it to stay on my lower lashes without making a real mess. I couldn't see any curling effect. But it is very black and is a lot easier to remove than Benefit. October 03, 2016
Rated 1 out of 5 by helen44 Panda eyes !! I cant believe how much this mascara has smudged after only a few hours of wearing, I really wish I had looked in a mirror sooner, thank god I hadn't been anywhere important. Yet again another mascara I will be returning but thank goodness I can !! but at this rate its going to cost me price of a decent mascara with all the postage! September 04, 2016
Rated 5 out of 5 by Redhead54 The best! Sometimes I feel like I've tried every mascara out there with varying results and that feeling of not being quite satisfied but then I saw the demo and decided to try it. It's brilliant - I did wonder as the brush seems quite big but it really does the job and love the way my eye lashes look! I'll be re ordering without any doubt and would definitely recommend. Doris - any chance of this in brown, I'd just love to have a great brown mascara as well! :) August 30, 2016
Rated 5 out of 5 by Ja2015 Best mascara I have ever used This is amazing. I have short and sparse eyelashes which I am trying to remedy with Revitalash (currently not working!) but since getting this mascara in a TSV at the start of the year, my lashes look great with just one coat. It's not thick or clumpy and I think it's the brush which does the magic as it is different to any mascara brush I have seen. I used to buy a very expensive brand which seems to go gloopy soon after opening and soon had to be binned. I'm still on my first Doll 10 mascara after many months and it seems as fresh as ever. This is important to me from a value point of view. I highly recommend this. I will definitely stick to this mascara, no point trying anything else. The search is over! August 17, 2016
Rated 5 out of 5 by Foxy66 What a smashing Mascara I have just put this on for the first time, it's great you get curl , length, and full looking lashes. I have tried a lot of Mascaras and this one is up there with the best.(if not better in some cases) I will buy again and again. Well done Doris. August 13, 2016
Rated 4 out of 5 by glossgal A class act I'm very fussy about mascara so was not necessarily expecting to love this but it is excellent! I'm lucky to have very long lashes, people think this is great but it is actually hard to find a mascara that doesn't cause spider lashes. This thickens without being heavy or gloopy and there is resistance when you touch them ie they hold their shape/curl nicely. I think I will mainly use this for evenings as it does give that impact you need when putting on the war paint! However it could easily be used for daytime if you like a stronger look, I personally prefer dark brown mascara for work-would love this in brown please Doris! August 01, 2016
2 3 Next