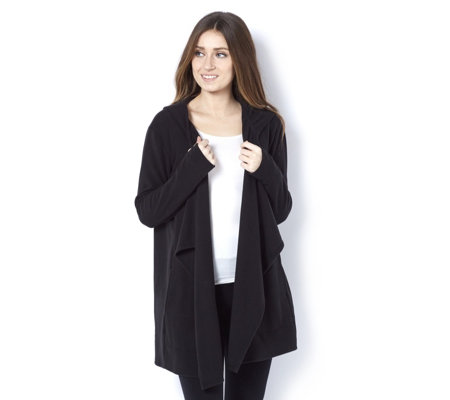 A hooded wrap cardigan from Cuddl Duds with a draped, waterfall front, slot pockets and long sleeves with thumb holes. Switch your phone off, get the kettle on and indulge in a little rest and relaxation in this supremely snuggle number.

Crafted from super-soft fabrics in a variety of colours and silhouettes, Cuddl Duds offers cosy, comfortable pieces around which to build a layering wardrobe. Shop this collection of comfort and loungewear to ensure you look your stylish best, even on dress-down days.
Print this page

Rated 2.5 out of 5 by 31 reviewers.
Rated 1 out of 5 by Dunk Not as good as they made out It is nice and soft, but arms bubbl after 1 days wear, trousers are awful also January 26, 2017
Rated 1 out of 5 by fernlea Sadly I was so looking forward on receiving this. However after one wear my clothes were full of fluff and the car furnishings etc. Due to the cost of returns it will be loungewear and hopefully my furniture wont be covered again January 24, 2017
Rated 2 out of 5 by Matilda4 Very Poor So disappointed with this garment. Style is lovely, Super soft but sadly the quality of material used is very poor. Started to pill badly after only wearing once. Total waste of money. January 22, 2017
Rated 3 out of 5 by missmouse Disappointed I really liked the look of this on air. It is soft and cosy as described. However it is much more suited to being a coverup over pjs than a cardigan for day wear. The fleece pilled badly after just a couple of wears. January 22, 2017
Rated 1 out of 5 by molmon Disappointed I like the style of this cardigan and it's lovely and warm but so disappointed in the quality - after I wore it for the first time it has 'bobbled' all along the sleeves - will only be wearing it in the house now because of this. January 05, 2017
Rated 5 out of 5 by Caileg Smart and comfortable Bought this for my mother to go with the matching trousers. She loves it and tells me that it is warm. Not solely leisure wear but casual dressing too.she is a size 8-10 and the small fits very well. December 29, 2016
Rated 2 out of 5 by LILYANNJESS Shame I ordered 2 of these in different colours, I liked them when they arrived however I wore one for a day and was covered in fluff, my car seat was covered in fluff and anyone that came near me suffered the same outcome, so I washed one and although a little better, it has bobbled quite badly in no time at all, will keep one because it is soft and cozy and will lounge around in it, but the other one is going back December 27, 2016
Rated 2 out of 5 by muggie poor fabric ordered this in a large black, it was very roomy made me look frumpy I am a 14 small 16 unfortunately sent it back as it was very thin cheap fleece and the black wasn't true it looked washed out, could have bought better on the high street, sorry QVC December 20, 2016
2 3 4 Next