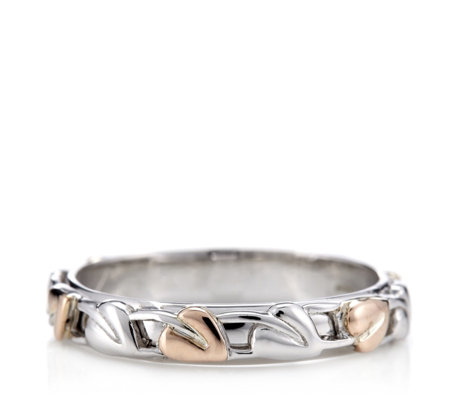 This intricate ring combines gleaming sterling silver and 9 carat rose gold in a beautiful design inspired by nature. A gorgeous piece you'll want to wear every day, this classic ring lives up to the Clogau reputation for beautiful designs in the finest materials.

A second-generation family business based in Wales, Clogau jewellery boasts a touch of rare Welsh gold in each and every piece, offering Celtic-inspired designs that are timeless and elegant.

Rated 4.1 out of 5 by 85 reviewers.
Rated 2 out of 5 by Sandyo Problem with this ring Purchased this for my daughter for Chritmas 2015, she loved it, it is a beautiful ring, but there's a problem with the top layer splitting away from the Silver band. It only lasted 13 months. If purchased through Clogau themselves it would have been guaranteed for 2 years, but QVC only give 1 year. Extremely Disappointed, especially as it was a gift. January 28, 2017
Rated 5 out of 5 by twinned Much wanted ring I have wanted this ring for the last two years since first seeing it on one of the shows. However my husband did not take heed of all the hints until I actively had a major sulk just before Christmas, over what he could get me! This ring is as pretty as it looks on screen, is very comfortable to wear all the time and I love it. Thank you QVC, Clogau Vompany and thank you husband for finally remembering! January 04, 2017
Rated 2 out of 5 by Alycat So very disapointed.... My triplets bought this for my Christmas present last year and I have only worn it to special occasions (6 times). On the last time I wore it, I noticed that the outer ring was moving away from the inner ring and then on closer inspection, found that the outer ring had broken! The ring on the demo above looks much much more substantial and I am so disapointed that this ring has broken so soon. It is going back but I am going to try with another just to see...... October 17, 2016
Rated 2 out of 5 by houseyhousey two rings in one I was looking forward to my first purchase of Clogau. The ring arrived and it seemed much narrower than in the presentation and also was made of two rings one inside the other. It appears that other customers have had problems with the rings parting company and I did not want to take this risk. I could see the gaps between the two rings and think that this is a strange way to construct this piece of jewellery. Also have now discovered that this jewellery is made in China and I thought I was buying something actually made in Wales . Sorry QVC, it will be on its way back to you soon. September 21, 2016
Rated 5 out of 5 by reg34 JUST PERFECT I ordered this lovely band ring for my wife for our anniversary, the ring fits perfect, I ordered her usual size, it looks great with her wedding ring and she loves it, would recommend July 09, 2016
Rated 1 out of 5 by Vila Not good. It saddens me to say I'm really, really disappointed with this ring. I'd so looked forward to wearing it, but the outer band with leaves started to separate from the inner band after only 4 days wear. It's going back, I've noticed that some other reviewers have said the same. As it seems to be an ongoing issue, it should really be addressed, as people are being left disappointed; plus, some people want this as a wedding band. The problem has to be sorted. July 01, 2016
Rated 1 out of 5 by pg24 Very disappointed Bought this ring last April. It was a replacement for my original wedding ring. After wearing for just over a year it has now split in two. The outer ring has come of completely, this was not a cheap purchase and I would definitely urge customers to think twice before spending money on this item. I see quite a few others has had the same experience with this ring. Not good enough quality. June 30, 2016
Rated 1 out of 5 by pwsseywoo So expensive So expensive considering made in China. Always thought Clogau jewellery was made in Wales, seems that it is not so. Very disappointed . April 23, 2016
2 3 4 5 ... 11 Next