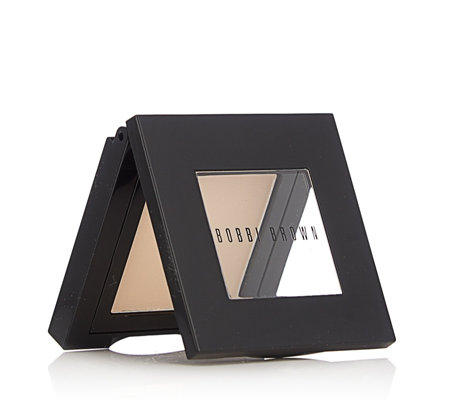 Give your lids an even coat of colour with this silky matte Eye Shadow formula in Bone from Bobbi Brown. This Bobbi Brown formula has been developed to glide on smoothly and blend easily for a perfect base.
Contains:

Synonymous with fresh, clean and modern beauty, Bobbi Brown worked as a professional make-up artist before launching her eponymous range. Whatever your age or skintone, Bobbi Brown combines flattering natural tones with catwalk trends for a natural make-up look.

Rated 3.6 out of 5 by 69 reviewers.
Rated 5 out of 5 by Ozzy amazing - wouldn't be without it Just as Pippa says I will definately be scraping this eyeshadow from the corners before the empty pallette goes in the bin, it is fantastic. I am not an eyeshadow wearer, but this along with my black gel eyeliner & mascara and I look awake. It makes the eyes look so clean. I wear it everyday & wouldn't be without - amazing!!! April 06, 2011
Rated 1 out of 5 by tauruslady Yes, awful! I quite agree with some reviews, awful,, this eye-shadow stayed on for around half an hour even with an eye base on. I was leaft with nothing except tiny white specs on my eyelids. Very poor quality for such an expensive cosmetic house! This is the first purchase I have ordered from Bobbie Brown, I am afraid it is the last! November 15, 2015
Rated 1 out of 5 by nonshinylady awful use a very cheap high street brand which is excellent ordered this as it had some fab reviews; I donot wear eyeshadow and just like a base to give clean eye; this can be very hard to get as some are too pink others too yellow; thought I would treat myself to this ; what a disaster ; first major problem that I use decleor eye serum from qvc to stop hooded eye lids; this was not a problem with my high street brand but with this shadow , the shadow went clumpy and patchy; second major problem was it was not long wearing ; did not use my eye serum and on a dry eye after a couple of hours shadow had vanished leaving a discoloured eye lid;what a let down don't waste your money May 10, 2015
Rated 2 out of 5 by LittleMissChatter Really disappointed Waited for ages for this to come back in stock but really disappointed at the quality of this shadow. Wanted as an everyday colour to cover eyelids & highlight brow. Tried using with a brush & sponge but powder just falls everywhere when using. Had to reapply a lot to get any coverage & has no staying power. Maybe this was a 'dud' item but returned. March 27, 2015
Rated 5 out of 5 by shillitoe bright eyes I don't usually wear eye shadow as it makes my eyes look heavy but this one is the best I have ever tried Its like putting silk on your eye lids and what a difference it makes it really does lighten up my eyes thanks and I will buying it again and again December 15, 2014
Rated 5 out of 5 by MinnieRia A bone-us for your make up bag What a product? a great product! it lifts the eyes. Only yesterday I thought "I need a little something more this morning". This was what I used, it widens that area between the eyebrows and the lids. Very natural like a primer it brightens. I also sometimes use it in the inner area between the nose and where the eye meet. You look at it and think what can it possibly do ? a lot that`s what... May 24, 2014
Rated 5 out of 5 by geishadoll great base colour does exactly what it says. far nicer than other brands I have used. July 12, 2013
Rated 1 out of 5 by gemcollector Not impressed I was looking forward to using this product but I was sadly very disappointed. Considering the price I was expecting great things but I have used far cheaper matt ivory shadows from Boots which are much better. June 28, 2013
2 3 4 5 ... 9 Next