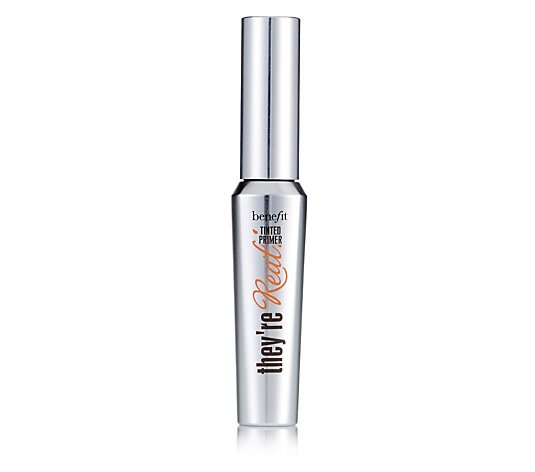 Benefit's They're Real Tinted Lash Primer can be worn two ways - as a primer to dramatically boost the look of your lash length and separation before applying your mascara, or wear alone to help define and tint the appearance of your lashes for a feathery, natural look. Whether you're getting glammed up for a night out with the girls or simply want to leave the house feeling your most gorgeous, it's your new beauty best friend.
Contains:

Rated 3.9 out of 5 by 8 reviewers.
Rated 5 out of 5 by Halgabronmaid Brilliant stuff! I am just about to order my third one of these. It does for me exactly what it is supposed to - It's great as an every-day eyelash enhancer when I don't want to look particularly made-up (dog walking on the beach etc) but can be topped-up with They're Real mascara later in the day if necessary. Like a lady has previously mentioned, Revitalash has restored my once long and luxuriant lashes and they can become a dominant feature - lovely, I know, but but not necessarily what I want every day. I'm 62. I haven't had any issue with smudging as some people have mentioned, but I only use on my upper lashes during the day, so maybe that is why. October 07, 2016
Rated 2 out of 5 by Jolie76 Spider lashes Really wanted to like this mascara. So much so that I've tried it on two separate occasions. There's so much hype over this product but I found it very clumpy, particularly when using vertically and just cannot get on with it at all. Had to remove it. I will say, the pigments were very good but this mascara is not for me. Glad I bought it from QVC so I could return it. September 27, 2016
Rated 5 out of 5 by joy99 Just Perfect I have an array of benefit products and this one l use most days especially at work. Yes you can use it then top up with there real mascara but for work l think this formulation is just right. Its not too heavy and your eyelashes are still flexible and they feel conditioned. Also importantly its much easier to come off. It's brown in colour which is coming back into fashion again too. July 03, 2016
Rated 2 out of 5 by emperorsnewclothes migrates I like the colour. Brown looks so much better than black on me in the daytime since my lashes improved with revitalash. With black I look a bit over the top for my age. However the colour migrates to under my eyes and so it has to go back. Thanks for letting me try though. March 13, 2016
Rated 5 out of 5 by Ang13 Great Primer/Mascara I love this, I do have They're Real Mascara & Roller Lash but was at the airport and the Benefit's lady suggested this as I don't wear make up very often. I use this instead of wearing a mascara in the day and then if I go out at night I add in one of my other's depending on what look I'm going for. nice soft brown colour, goes on well and looks very natural. March 09, 2016
Rated 5 out of 5 by unique52 great ! I've been looking for something like this for ages - don't always want to wear mascara as I do have really long good lashes - but wanted something to just give them a bit of gloss or separation - I even thought about using Vaseline with an old mascara so when I saw this I sent for it straight away - its absolutely brilliant for me - it's as good as mascara but without the feel of it and it really does make my eyes and lashes stand out - in fact if I wore mascara as well I don't think I'd like it as my eyelashes always " crash " against my glasses if I put two coats of mascara on anyway plus they start to look false #no , I'm not being clever or bragging # and I don't like that look - will definitely re order on regular basis as I love it and would highly recommend this to anyone - can't see what's not to like ! February 06, 2016
Rated 2 out of 5 by PinkAngel09 Nice product, shame about the smudging This is such a great idea, having nourishment within a lash primer. It goes on nicely and give a great natural effect, but creates lashes which look really good even without mascara over the top. I tired the product on its own with no other make up on, and although I liked the effect I was disappointed on each occasion to find smudging under my eyes. Such a shame as a great product, but I'm returning due to the smudging. January 23, 2016
Rated 5 out of 5 by Snowbunni Impressive I was very surprised at how good this product is. I think this delivers what it promises, perhaps more. For me it adds length and thickness without being over the top. It will definitely be a repurchase January 22, 2016
1-8 of 8 reviews