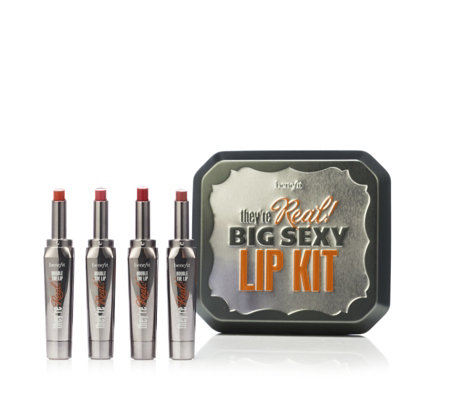 A gorgeous selection of They're Real Double the Lip lipsticks and liners featuring an innovative teardrop-shaped stick, with the lipstick as the base and a darker lip liner at the tip of the design to help you get a flawless result every time. You're spoilt for choice with the selection of fiery orange, cherry red, true pink, and rosy neutral shades in rich and long-wearing formulas.
Contains:

Rated 3.2 out of 5 by 11 reviewers.
Rated 2 out of 5 by Yorkluvvie Disappointing What a good idea I thought when I saw them but disappointed when they arrived. Packaging great but the pigment colour was not strong enough for me & it was too much of a faff to line my bottom lip. Also didn't think they made my lips look plumper or sexy. Going back. January 04, 2017
Rated 4 out of 5 by Tinky17 Very wearable Ordered these as I've can never be bothered to use lip liner and to be fair they all have a lovely colour and the concept is great. However, after the first few uses, they wear down unevenly and although the lip colour is still great, the liner part has worn down considerably more, making application a little more challenging. December 13, 2016
Rated 5 out of 5 by Ymdrech Beautiful. What a great idea. I have not applied lip liner in the past but these great lipsticks do it all. I showed it to the girls at my hairdressers including the beautiful who all thought they were great. It has made me more adventurous with colour. My daughter is keen to get a set of these if and when they are available. Mine have not broken as a previous revised mentioned and the handy permanent packaging is great. Innovative and good value. October 13, 2016
Rated 3 out of 5 by Gingerblonde Didn't meet my expectations... Waited to receive this dinky set, what a good idea I thought. Still think its a great idea but not for me sadly. Opened the pack to find the tin dented, weird. Anyway, tried Flame Game which was rather vivid but my colour. Went on fine, looked ok for just over an hour, then dried and faded...:-(. Tried Lusty Rose twice, same thing, applied well but went very dry and faded. So other two shades not even attempted. Set going back sadly. October 02, 2016
Rated 4 out of 5 by ditzydaisy Cheery colours, but a bit silly... Very cheery colours, wearable despite being bright, formulation feels quite hydrating and they last on the lips about as well as most lipsticks. The packaging is very sweet indeed! On the negative side you don't get a lot of product in these minis, and I found they break easily - so don't twist them up too much. The lipliner feature is a bit silly I feel... too much of a faff to apply as intended, especially on the bottom lip so I have taken to just swiping it on randomly and letting the two shades blend themselves together - surprisingly this doesn't look bad! Overall I like them, because of the colours and the packaging, and I would buy the full size in a couple of the shades but would ignore their main selling point - the built in lip liner - as I found it just didn't really work well enough. September 27, 2016
Rated 5 out of 5 by BWandSimonfan Great Colour I just love this selection. I don't usually wear strong colours but with these I am now being more adventurous. The pigment is so good and I do like the lip pencil part of it. Would like to buy more but no longer available. Understand there will be full size version later in year - I will be buying. September 10, 2016
Rated 5 out of 5 by Grisham FANTASTIC Another fantastic buy from Benefit. Absol love the colors. The amazing thing, is they are just not lipsticks. I always use a lip liner, but Benefit has given, not only a lipstick but a liner as well 2 in 1. One side of the lipstick is a lip liner and turn it round and you have a lipstick. They come in a real quirky tin. The price is also fantastic. September 06, 2016
Rated 2 out of 5 by Jem91 Too bright I like the concept of these but the colours are just way too bright for me. Apart from the dusky rose, I wouldn't have worn them and so I had to return it for this reason. September 02, 2016
2 Next