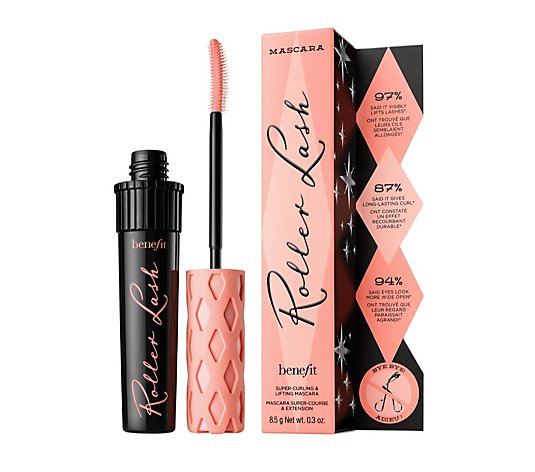 This innovative Roller Lash Super Curling & Lifting Mascara from Benefit helps to give you the look of longer lashes, with a curve-setting formula that works to provide long-lasting hold and a specially designed, flexible Hook 'n' Roll brush that grabs, separates, lifts and curls every lash. Flutter those gorgeous lashes and really get noticed with this eye-opening Benefit mascara.

Likely to re-order this item?
Choose our Auto Delivery option and receive this item once every 90 days for a 12 month period at today's price.

What is Auto Delivery?
If you're keen to stock up on this item then you can sign up for our Auto Delivery plan, where you'll receive further drops of this item over a specified period, at today's price. Click on the Auto Delivery tab above to purchase this plan.

Rated 4.1 out of 5 by 139 reviewers.
Rated 5 out of 5 by jane54 Wonderful This mascara is seriously good. Separates lashes and doesn't glog love love love it. January 15, 2017
Rated 2 out of 5 by Meemee82 Meh Not the best mascara I've used but not the worst either. Considering all the good reviews and price I expected much better results, it took a lot of time and effort to get a half decent result and it's did not curl my lashes like it's intended to do. Won't be buying again unfortunately. December 23, 2016
Rated 1 out of 5 by lemo Dissapointed I was excited to try this and as I love 'They're real' had high hopes for this new mascara but I'm afraid it does not live up to the hype. Firstly it doesn't curl, at all, not sure how benefit can claim it does. Secondly, despite scraping the excess on the tube and blotting the wand with a tissue it goes on in awful thick clumps. I've had better results with basic, much cheaper high street mascaras. Really unimpressed with this product December 15, 2016
Rated 1 out of 5 by shopperbev Sorry doesn't hold Sorry it doesn't curl or hold a curl and seemed to stay wet so it was smudging, not what I'd hoped from this brand December 01, 2016
Rated 4 out of 5 by sunny23 Good but not smudgeproof This is an amazing mascara for the effect it gives as my lashes look longer and fuller with just one coat. The downside is that it is not even smudge proof, never mind waterproof. If this was fixed I would not hesitate to give it 5 stars. November 09, 2016
Rated 5 out of 5 by Choolee Absolutley brillant Tried the other mascara their real, wasnt impressed but this is the best mascara iv ever used and iv tried many, Dior, estee lauder, clinique, dont hesitate to buy this, its brillant, thanks benefit November 03, 2016
Rated 4 out of 5 by Scarlettsapphire Wow your lashes Firstly love the packaging. Goes on very smoothly. No clumping and separates the lashes perfectly. My lashes look amazing with this. I have always used false lash effect mascara in the past but my lashes look amazing with this. One of the only mascaras not to run under my eyes. Only downside is taking it off. It leaves lashes slightly sticky feeling. October 26, 2016
Rated 4 out of 5 by Misslinda1966 Impressive Wow, I am a fan of 'there real' mascara but thought I would try this for a change. Wow, Wow. Makes lashes long and glamorous. Really impressed and would definitely recommend. October 10, 2016
2 3 4 5 ... 18 Next