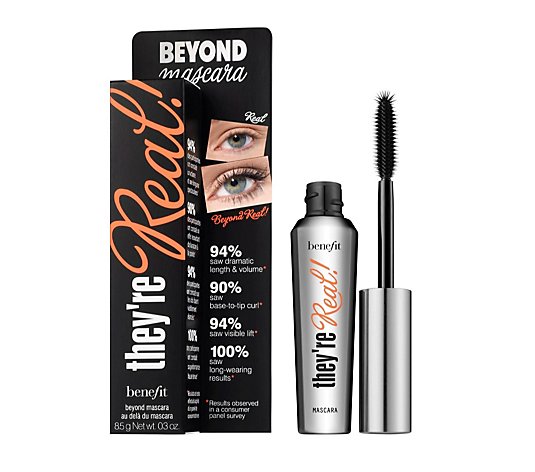 Benefit's They're Real Lengthening Mascara boasts a jet black, long-wearing formula that works to lift, curl, separate and define your lashes without flaking or smudging. Use this must-have mascara to reveal a gorgeous lash look with visible volume and turn heads with just a wink!


Likely to re-order this item?
Choose our Auto Delivery option and receive this mascara once every 90 days for a 12-month period at today's Price.

Rated 3.4 out of 5 by 169 reviewers.
Rated 5 out of 5 by fairypaws My hero product! I have very blonde lashes and the only way to make them visible is mascara. I have tried a lot of different ones over the years, but now I wouldn't be without They're Real. The brush is amazing, it goes on smoothly from root to tip and the end even has a a little brush for getting the smaller inner/outter lashes. Perfect! I'm honestly really shocked this product hasn't got a higher rating, I'd give it five stars all day long! The mascara itself doesn't smudge and it lasts all day. It acts likes a waterproof mascara whilst it is on, but washes away nicely with warm water at the end of the day. December 18, 2016
Rated 2 out of 5 by philsyl Don't blink for 5 minutes. I had this as a present, or I would have sent it back. On the demonstration it didn't say don't close your eyes, or the mascara will be all over. I know the so called experts have a job to do, but they are not being fair, selling this product. I would think twice before I bought any of the benifit products. November 27, 2016
Rated 1 out of 5 by joshuababy1 Panda eyes I have waited ages for this mascara on wait list, it has eventually arrived and I tried it for the first time yesterday, what a let down! Clumpy spider lashes and black smudge lines on my cheeks. It took ages to remove the smudges, when I looked in the mirror some 2 hours later the mascara had smudged into my crease on upper eyelids. To remove this mascara took some doing and also removed a few of my eyelashes, i have woken this am with black marks under my eyes and swollen eye lids not a good look! Thank heaven for the 30 day return policy, if I had bought on high street it would have been binned. September 07, 2016
Rated 2 out of 5 by aineraff Its alright, doesn't live up to the hype I was really excited to try this mascara as it said its the number one bestseller in the world apparently and I tried it one in Boots at the Benefit counter, it made my lashes look great but when I got the real thing it made my lashes clump, very hard to separate once it dried. I had to comb my lashes to get them to separate and I feel with such a high end mascara it shouldn't clump they way it did. Also when taking it off with my cleanse and polish, I found it hard to get the mascara off and I had to tug on my lashes to get it off and that's a red flag for me personally. Quite disappointed with the mascara. July 28, 2016
Rated 3 out of 5 by GlamCandi OK, room for improvement. I'm a benefit user particular using there blusher. I wanted to try there mascara and based on the reviews I went ahead with it, what's great about QVC beauty products is that you can try the product and if you have an issue you return it. Most stores don't offer this on the high street which is why I came here. Lengthening - it works but clumps rather then a natural look, I have to remove extra product from the brush to achieve natural look. Fallout - I find this is drying mascara after an hour of being on little black dots are appearing on my face, which I've never had from any mascara before did not expect it from this. Brush - I find the extra tip of the brush pointless it gives no extra.....anything to my eyelashes despite trying it vertically and horizontal as suggested on the instructions. Long lasting - yes but not tried it in the rain or swimming pool or hot sunshine yet. I kept it, it makes my eyelashes look longer, it's just OK. I wouldn't purchase this again. June 30, 2016
Rated 5 out of 5 by Bronday Best Mascara Went to reorder this product recently and had to get on the wait list. Ordered the Joan Collins mascara in the meantime and boy was I delighted when my They're Real arrived to take over. They're Real has a simple, efficient brush which allows a subtle, delicate application or to build it up. Plus it's available in options other than just black. I'm staying with this brand from now on, a pleasure to use! April 23, 2016
Rated 2 out of 5 by ladyloulou Shame.... Loved the look of this and keen to try... It did a great job of making lashes look very long and full but if you smudge it slightly around the eye it won't come off! Had to try and cover with extra foundation and left a muddy look... not good and not a quik fix when you're late... Great once it's dried - then it stays forever, as other reviews have said... I find my favourite Purity Made Simple cleanser got it off but only after a lot of rubbing, which I don't want to do around the eyes..... All in all it's ok but too wet and transfers on application to skin and won't come off!! March 06, 2016
Rated 2 out of 5 by Tezabella Very drying This mascara goes on easily and it looks amazing, it really does deliver on that false effect lashes. The reason for the 2 stars is that as the day wears on the mascara drys out and can flake, it goes brittle and pulls on my lashes. It's also difficult to remove. I really do not see why this is the uk's best selling mascara! February 13, 2016
2 3 4 5 ... 22 Next